One of the biggest criticisms against electric-car maker Tesla Motors' (NASDAQ:TSLA) is the company's tendency to miss delivery targets. While the automaker is undoubtedly growing rapidly, Tesla has missed its initial guidance for vehicle deliveries for two years in a row -- and there's a chance Tesla could end up underperforming its initial annual target again this year.

However, considering just how ambitious Tesla's annual targets are, the automaker's ability to ramp up production isn't necessarily a weakness. This has been particularly evident recently, as Tesla is very close to hitting its initial 2016 delivery target, which represented management's most ambitious growth objective yet.

But Tesla lowered its full-year guidance after a slower-than-expected initial production ramp of its Model X SUV weighed on delivery growth in the company's first and second quarters. In a July 3 press release detailing the company's second-quarter deliveries, Tesla said it now expected full-year deliveries to be closer to 79,000.

Management similarly decided to reduce full-year guidance for vehicle deliveries in both 2014 and 2015.

In 2014, Tesla initially set out to deliver 35,000 vehicles. But worse-than-expected production growth led management to reduce guidance to "approximately 33,000" units in the third quarter of 2014. And actual deliveries for 2014 ended up at about 32,000.

These missed targets may have some investors growing wary of the company's guidance.

A weakness or a strength?

Given Tesla's reoccurring theme of falling short of annual guidance in recent years, it's easy to conclude that the company's outlook for vehicle deliveries can't be trusted. But some context shows why investors may want to overlook this apparent fault.

First, investors should realize that Tesla's misses were on big targets. A zoomed-out view of Tesla's production reveals staggering growth, making missed annual targets appear less pertinent to a criticism of the company's growth story. In 2013, Tesla delivered just over 20,000 vehicles. Today, Tesla is delivering vehicles at an annualized run rate of about 100,000 units.

Further, total deliveries in 2013, 2014, and 2015 are only about 5% lower than the total of each year's initial guidance during this period -- not bad for a company growing this fast. 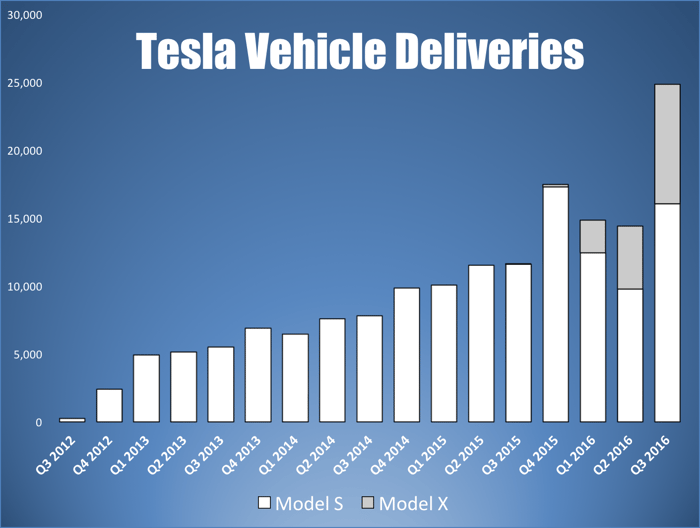 Second, despite a slower-than-expected initial production ramp-up of its Model X during 2016, there's still a reasonable chance Tesla could meet its initial guidance range for the year. In order for full-year deliveries to come in at the bottom of Tesla's initial guidance range, fourth-quarter deliveries would only need to be about 5% higher than management's guidance for the quarter.

Viewing Tesla's impressive ramp in vehicle deliveries between 2013 and 2016, and considering Tesla has only slightly underachieved its own initial annual expectations during this timeframe, the company's ability to grow production and deliveries is probably better defined as a strength than a weakness.

Of course, if Tesla's fourth-quarter deliveries somehow come in lower than expected, this optimistic view of the electric car maker's ability to ramp up production may be worth revisiting.

Tesla's ability to increase production and deliveries today is more critical than ever as the company prepares to bring its much higher volume Model 3 to market next year. With the help of Model 3, Tesla is planning to increase annual production from an estimated 80,000 vehicles this year to 500,000 in 2018.