It's been a little more than a year since Jack Dorsey, co-founder of Twitter (NYSE:TWTR), returned to the company as CEO. He had been previously ousted from that same position in 2008, well before the social networking company went public. Twitter grew like gangbusters in the intervening years, with revenue surging from just $106 million in 2011 to $1.4 billion in 2014. But costs grew just as fast, leading to massive losses.

Twitter was struggling when Dorsey retook the helm in 2015. User growth had slowed, with the company adding just a few million active users each quarter to its base of around 300 million users. The platform was hard to use and confusing to some, which drove users away. Hate speech, online harassment, and abusive users were a big problem. The company's habit of excessive stock-based compensation was diluting the positions of existing shareholders. Costs continued to soar right along with revenue. And the stock had lost more than 60% of its value since peaking soon after its IPO.

Dorsey had found success after leaving Twitter in 2008. He founded Square, a mobile payments and financial services company, taking it public soon after returning to Twitter in 2015. In choosing Dorsey as CEO of Twitter, despite his refusal to step down as CEO of Square, Twitter's board subscribed to the belief that all it would take to save the company was the right leader, even if that leader was only part-time.

The stock hasn't fared any better since Dorsey returned as CEO, down another 40% or so. Revenue growth has slowed dramatically, user growth continues to be sluggish, massive net losses have continued, and a recent effort to sell the company to the highest bidder was a flop. Twitter's focus on live video has yet to bear fruit, and the election showed that vitriol and hate speech remain prevalent on the platform. 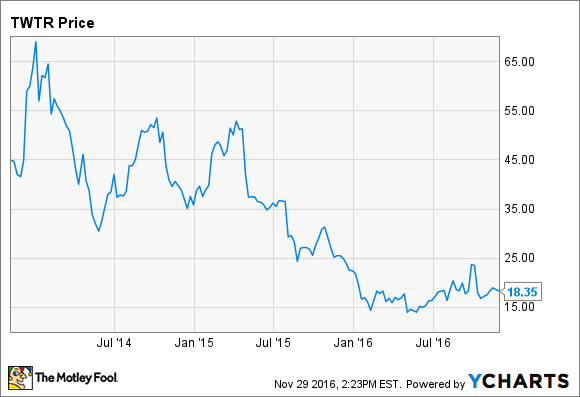 There's a strong argument to be made that having a full-time CEO is a good idea, and having a part-time CEO is a bad idea. But I don't think different management would have changed much for Twitter. Warren Buffett, famed value investor and a source of near-infinite wisdom, described Twitter perfectly in this quote from nearly 30 years ago: "With few exceptions, when a manager with a reputation for brilliance tackles a business with a reputation for poor fundamental economics, it is the reputation of the business that remains intact."

The drama surrounding Twitter's failed attempt to sell itself earlier this year should act as a glaring red flag for investors. Buyout rumors began surfacing in August, and a string of companies -- including Salesforce.com, Disney, Alphabet, Microsoft, and Apple -- were reportedly in the mix. No deal was ultimately reached.

Twitter's price tag was probably the biggest impediment to a sale. The company's current market capitalization is around $13 billion, and any acquisition would have likely involved a meaningful premium. That's a high price to pay for a company with annual revenue of $2.5 billion, a stagnating user base, and net losses measured in the hundreds of millions of dollars.

Twitter's live video strategy is giving investors hope that the company can turn things around, but I have serious doubts. Twitter paid $10 million earlier this year to stream 10 NFL Thursday night games, beating out Facebook and Amazon, in the hopes that bringing high-quality content to its platform would drive user growth. But competition for content is only going to increase: Amazon is reportedly considering adding live sports to its Prime subscription service, and Facebook is making a similar push into streaming sports events. Given Twitter's long history of execution problems and relative lack of resources, I don't see how it successfully competes in the long run with those two giants.

My best guess is that Twitter will eventually be acquired after its live video effort fails to drum up the kind of user growth that management expects. The price tag will be low, almost certainly lower than Twitter's current stock price. There's still a chance that Twitter could turn things around, but that would require an awful lot to go right. Investing in the social media company looks like a losing bet to me.