After years of disagreement and several prior disappointing outcomes, OPEC members finally agreed to a deal to cut their output to boost oil prices. The impact of that agreement was immediate, with crude prices bounding 8% higher to around $50 a barrel. Those higher prices drove up oil stocks, especially those in Canada, which had been hard hit by the downturn. Leading the way were Encana (NYSE:OVV), Baytex Energy (OTC:BTEG.F), Cenovus Energy (NYSE:CVE), Pengrowth Energy (NYSE: PGH), and Crescent Point Energy (NYSE:CPG): 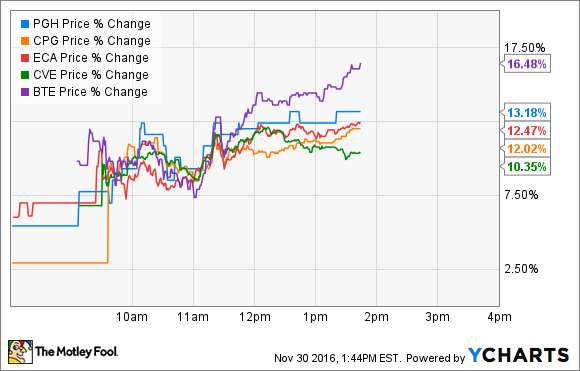 Here's why this deal was so important to these Canadian oil stocks.

For the most part, Encana would have done just fine without any OPEC intervention. That is because the shale driller has cut costs and repositioned its portfolio to thrive at lower oil prices. In fact, Encana recently put out a five-year growth forecast that projected production growth of 60% by 2021 based on crude averaging $55 a barrel going forward. Fueling that growth is the company's enormous inventory of premium drilling locations, which are those that can earn a 35% after-tax rate of return at $50 oil. Because of those lucrative returns, and the fact that the company is targeting higher-margin liquids going forward, it expected cash flow to surge 300% by 2021 at $55 oil. Suffice it to say that if the OPEC deal pushes crude past that level, then Encana can deliver exceptional growth and returns in the years ahead.

Likewise, Crescent Point Energy has repositioned its business so it can thrive at lower oil prices. Because of that, the company recently increased its preliminary budget for 2017 from 950 million Canadian dollars to CA$1.4 billion, with that incremental capital planned for the second half of the year when the company had expected prices to be higher. That additional money would enable Crescent Point Energy to deliver 5% to 8% production growth next year. That said, with the OPEC deal in place, and plenty of cash on its balance sheet due to a recent equity issuance, Crescent Point Energy could accelerate that plan.

Meanwhile, for a company like Cenovus Energy, the OPEC deal could give it the confidence to boost growth spending when it releases its 2017 budget early next month. Due to weak oil prices this year, Cenovus had significantly cut back on capital expenditures, which is why its conventional production was down 14% in the third quarter. However, with $3.9 billion of cash on its balance sheet, Cenovus has the capital to invest in new conventional projects as well as potentially greenlight some of its stalled oil sands growth projects. For example, the company spent some money this year on engineering plans for its Christina Lake phase G expansion, which puts it in the position to start construction on that project next year, especially now that there should be a much more stable oil price environment thanks to OPEC.

Baytex Energy is another company that needed to see more stabilization in the oil market before it ramped up spending. In fact, the company currently needs crude to be at least $55 a barrel to provide it with enough cash flow just to maintain its current production rate going forward. However, with OPEC putting a floor beneath oil, Baytex Energy is more likely to restart its dormant Canadian heavy oil drilling program next year. Furthermore, the company could also start back up some of the shut-in production at its most recent acquisition much faster than initially anticipated.

The one Canadian producer that might stand to benefit the most from the OPEC deal is Pengrowth Energy. Before the deal, the troubled company warned that unless oil and gas prices improved it "may not remain in compliance with certain financial covenants in its senior unsecured notes and credit facilities during the second half of 2017." Furthermore, it has a mountain of debt maturing next year that it also must address. However, if oil prices keep rising under the OPEC deal, it could ease both of these burdens by enabling Pengrowth to generate the cash flow needed to remain compliant and pay down debt. Furthermore, it could open up the capital markets to allow the company to sell non-core assets or raise outside capital at attractive rates to put its balance-sheet concerns in the rearview mirror.

For Canadian oil companies like Encana and Crescent Point Energy, the OPEC deal could provide a nice boost to their future plans because they could have done just fine without it. However, for others like Baytex and Cevonus, the OPEC deal might be just the catalyst these companies need to restart dormant growth programs, or in the case of Pengrowth, the deal makes its survival a much more likely occurrence. Needless to say, OPEC's move today brings more certainty to the sector because it virtually eliminates the risk that crude prices will take another deep dive next year.