Brian Feroldi, Keith Speights, and Cory Renauer
(TMFTypeoh)
Author Bio
Brian Feroldi has been covering the healthcare and technology industries for The Motley Fool since 2015. Brian's investing strategy is to buy high-quality companies and then let compounding work its magic. See all of his articles here. Follow @brianferoldi
Follow @brianferoldi

It has been a wild year to be a biotech investor. Shares of the SPDR S&P Biotech ETF (NYSEMKT:XBI), a popular ETF that holds several dozen individual biotech companies, cratered and recovered multiple times in 2016 based on the political headlines of the day. 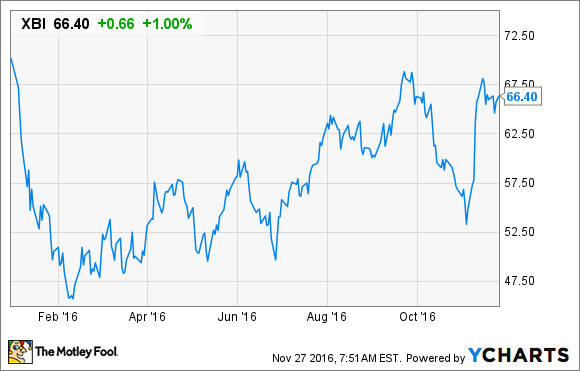 While biotech stocks in general soared in November after the surprise election of Donald Trump, the SPDR S&P Biotech ETF is still down more than 7% since the start of the year. That suggests there are still plenty of bargains to be found in the sector, so we asked a team of our healthcare contributors to highlight a biotech stock that they think is a great buy. Read on to see why they choose Anika Thearpeutics (NASDAQ:ANIK), Incyte Coporation (NASDAQ:INCY), and Exelixis (NASDAQ:EXEL).

Brian Feroldi (Anika Therapeutics): The vast majority of publicly traded biotech stocks burn through capital each year and are in constant need of cash. That's why I find it refreshing to see that Anika Therapeutics is not only profitable, but also returning cash to shareholders through a share repurchase program. Not many other small-cap biotech stocks can make that claim.

Anika Therapeutics specializes in tissue protection, healing, and repair. While the company has more than 20 products on the market, the bulk of its revenue comes from the drugs Orthovisc and Monovisc, both of which treat osteoarthritis in the knee. Sales of these drugs are growing in the upper single digits and will probably land at about $90 million for the full year. That's not a huge number, but it is big enough to allow the company to turn a profit.

However, what I like most about Anika today is its pipeline. Anika's next-generation osteoarthritis drug, called Cignal, has already gained regulatory approval in Europe and Canada. Anika has plans to have Cignal under review in India and Australia before the end of the year, and it's also holding talks with the FDA to nail down the approval process stateside. Anika believes that Cingal's total addressable market opportunity is $2 billion, so the drug's continued success could be a real needle-mover for the company.

Beyond Cignal, Anika is researching potential label expansion claims for Monovisc, and it has two other products in phase 3 trials that are aimed at cartilage regeneration and tennis elbow. Each of these products is aiming for nine-figure market opportunities.

Anika is profitable and growing modestly, and it offers a lot of upside it its pipeline works out. With shares trading for 22 times earnings, this is a great biotech stock to buy today.

To the next checkpoint

Cory Renauer (Incyte Corporation): This biotech's shareholders have a lot to look forward to in the quarters ahead. One program that pushes the stock to the top of my December shopping list, though, is a potential first-in-class checkpoint inhibitor on an interesting path to the front lines of skin cancer treatment.

Generally, cancer therapies are poorly tolerated, and first approvals usually limit new drugs to patients who no longer respond to well-known treatment options. New therapies rarely get first-line status (which makes a therapy the first option a physician will typically prescribe), but Incyte's epacadostat has a shot at becoming an initial treatment option for around 76,000 Americans newly diagnosed with advanced melanoma every year.

There are a couple of good reasons epacadostat pills might get to jump in the queue. First, the candidate doesn't kill cells tumor cells itself, which explains why it appears relatively well tolerated in early-stage studies. Instead, the IDO1 inhibitor makes it difficult for tumor cells to exploit checkpoints that stop a variety of immune cells from attacking them. Just as importantly, it's in a clinical study designed to support an application in combination with a well-established inhibitor of a specific checkpoint -- Keytruda, from Merck & Co. (NYSE: MRK).

Less than two years after Keytruda's first approval, third-quarter sales of Merck's star immuno-oncology drug suggest an annualized run rate of $1.4 billion as it heads toward peak estimates north of $8 billion. Epacadostat looks as if it could work wonders for Incyte's top line as well, and earning an approval as a first-line melanoma therapy will help it get there. To do so, patients in the group receiving the candidate in combination with Keytruda must survive far longer without disease progression than those who are injected with Merck's immunotherapy and given a placebo to swallow.

The partners aren't expecting data from the 600-patient late-stage trial until 2018, but they recently presented some encouraging figures from 19 similar patients receiving the same combo in an early-stage study. Incyte has plenty of other irons in the fire, but a stable of immunotherapy candidates throwing off data left and right in the quarters ahead make the oncology show worth the price of admission.

This rocket has more fuel in the tank

Keith Speights (Exelixis): There aren't many stocks as hot as Exelixis right now. The biotech has nearly tripled in value in 2016. Exelixis' shares soared more than 40% in November alone -- but I think there's more room to run.

Exelixis' Cabometyx already pulls in 20% of the market as a second-line treatment for kidney cancer after winning U.S. regulatory approval in April. The drug has an even greater share (35%) of the third-line treatment market for the disease. Now Exelixis is poised to go after a bigger opportunity.

Results from a mid-stage study of Cabometyx going head-to-head against the current first-line standard of care in kidney cancer, Sutent, were overwhelmingly positive. Exelixis now plans to file a supplemental new drug application as a first-line treatment. Barring a real shocker, the biotech should win approval.

Exelixis' pipeline includes 11 mid-stage clinical studies evaluating Cabometyx in treating other forms of cancer. There are plenty of potential catalysts to keep this biotech's stock flying high for quite a while to come.