Donald Trump's election has been kind to the stock market so far, with major indexes having reached record highs in the days following his victory.

However, at least one popular stock pick could be jeopardized by the incoming administration. The president-elect named two advisors last week who are notable opponents of net neutrality, the concept that all data traffic should be treated equally by internet service providers. This is a particularly sensitive issue for Netflix (NASDAQ:NFLX), which takes up more web traffic than any other company but owns none of the pipes that bring it into homes.

Netflix has repeatedly highlighted this issue in its earnings reports. In a recent one, the company said, "We support strong net neutrality across the globe, allowing all consumers to enjoy the Internet access they pay for, without ISPs blocking, throttling, or influencing content in the last mile or at interconnection points."

Netflix had been mostly pleased with progress on the issue under the Obama administration, but Trump's selections, who come directly from the telecom industry, threaten to undo that. The two men, Jeff Eisenach and Mark Jamison, have previously spoken against net neutrality standards, each having served as a lobbyist for the telecom industry -- Eisenach once called it a form of "crony capitalism."

Though net neutrality is a global issue, the U.S remains by far Netflix's biggest market, accounting for more than half of its subscriber base. Obama's Federal Communications Commission Chairman, Tom Wheeler, has been seen as proactive against monopolistic abuses among cable companies and telecoms, creating net neutrality standards and breaking up the set-top box monopoly that has inflated prices for cable boxes.

In February of 2015, the commission issued a set of rules to "preserve the internet as a platform for innovation, free expression, and economic growth.  The Open Internet platform above all prohibits blocking access to websites, throttling traffic, or accepting payment to favor one content source over another. Telecoms like Verizon (NYSE:VZ) have fought the regulations in the past, and an appeals court struck down portions of a former net neutrality bill in 2014.

What the end of net neutrality would mean for Netflix

If Trump's FCC rolls back net neutrality, it could have a number of consequences for Netflix, other streamers like Hulu and Amazon Prime, and small, independent content providers that may be unable to afford higher fees that ISPs could charge for better service.

The most likely outcome of the unraveling of net neutrality is that prices for consumers will go up as ISPs could charge extra fees to carry streams from bandwidth hogs like Netflix. Stricter data caps could also apply to mobile devices, making it harder to use such services away from home.

The biggest threat to Netflix, however, could be cable providers giving so-called "fast lane" treatment to their own services, as Comcast (NASDAQ:CMCSA) could do for its Stream service. The end of net neutrality would also give additional leverage to a combined AT&T (NYSE:T)-Time Warner (NYSE: TWX), as AT&T could use its Pay TV services like DirecTV and U-Verse to give preferential treatment to HBO and the Turner cable networks owned by Time Warner.

While rolling back net neutrality would be a challenge for content providers like Netflix, it would be a boon for cable and internet service providers, whose stocks have gained since the election. 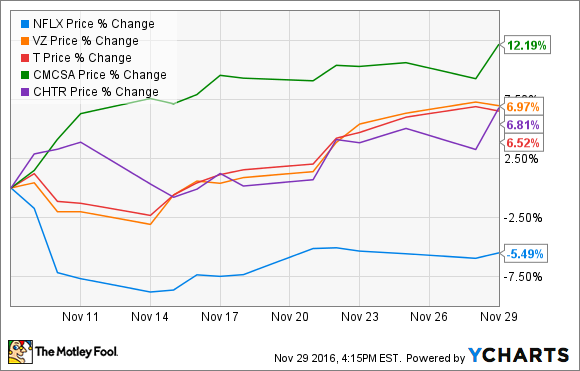 The net neutrality development comes at a time when communities are already toying with the idea of a "Netflix tax" or a surcharge on streaming services that treats them like a utility. Between local taxes and the end of net neutrality, Netflix could soon become more expensive for the average American. Expect CEO Reed Hasting to address this issue in the next earnings report, if not sooner, as Netflix has long been one of the biggest proponents of net neutrality.