Shares of Pure Storage (NYSE:PSTG) dropped on Thursday despite a third-quarter report that beat analyst expectations. A broad tech-stock sell-off may be contributing, although Pure Storage stock has been volatile since the company went public last year. At 3 p.m. EST, the stock was down about 10%.

Pure Storage reported third-quarter revenue of $197 million, up 50% year over year, and about $5 million higher than the average analyst estimate. The company's guidance for the quarter had been in a range of $187 million to $195 million. Pure Storage now boasts a customer base of more than 2,600 organizations, adding 300 new customers during the third quarter.

"Pure Storage continues to rewrite the rules for the data storage industry," said Pure Storage CEO Scott Dietzen. "We again reported better-than-expected financial performance, driven by customer enthusiasm for our smarter approach to enterprise storage. In a world dominated by big data and cloud computing, Pure's software-centric approach is the right solution at the right time."

Pure Storage expects continued growth in the fourth quarter, with the company guiding for revenue in the range of $219 million to $227 million. A non-GAAP operating margin between -9% and -5% is expected.

While Pure Storage beat its own guidance and the expectations of analysts, the stock still took a beating on Thursday. Volatility has been no stranger over the past year, so a big swing following earnings isn't out of the ordinary. 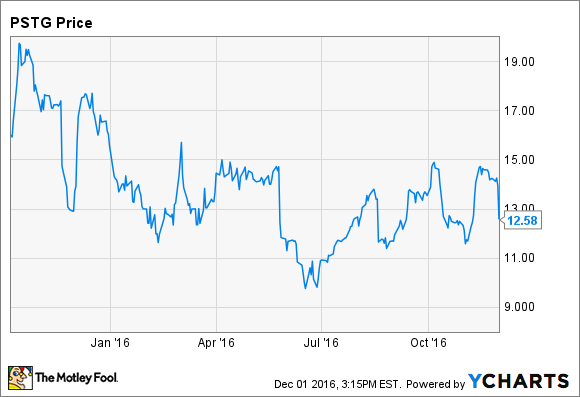 Tech stocks, in general, were selling off on Thursday, as well, which may have contributed to Pure Storage's troubles. The company's massive GAAP losses and negative free cash flow may also have investors concerned, despite the rapid revenue growth. Gross and operating margins are improving, but the company remains deeply in the red.