Meanwhile, Union Pacific Corporation CFO Rob Knight also had positive news for investors, particularly with his commentary on volume growth in the fourth quarter. Going back to the third quarter, Union Pacific's CEO Lance Fritz had spoken in the earnings press release of certain end markets "such as grain and energy" showing "signs of life," and those trends appear to have continued into the current fourth quarter.

For reference, Union Pacific's third quarter ended on Sept. 30, and Knight's update on fourth-quarter trading runs to Nov. 25. Here's a look at volume growth with the fourth-quarter data included: 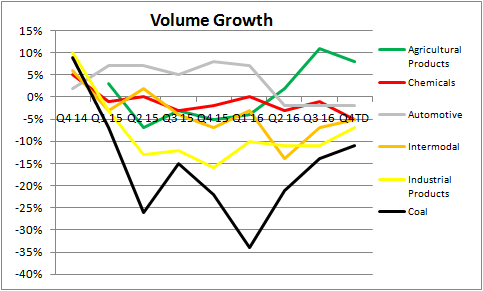 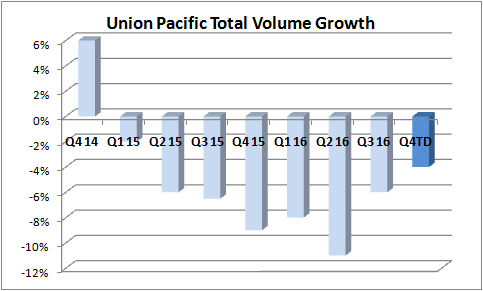 Yes. The updates on trading conditions demonstrate sequential improvement and suggest that the worst could be over for the railroad stocks. Ultimately, it's contingent upon macroeconomic conditions and energy prices, but no matter: It's a positive update from both railroads and should be welcomed by investors.

In particular, CSX's update suggests that conditions are a bit better than previously anticipated, so both stocks could be moving into underpromise/overdeliver mode -- usually a winning scenario for investors.

In addition, Union Pacific's update shows areas like construction and domestic intermodal improving, suggesting pockets of strength in the U.S. economy -- plus relative improvements in coal, also suggesting that the industrial economy in the U.S. could be over the worst.