Microsoft's (NASDAQ:MSFT) "lost decade" under Steve Ballmer is ancient tech history at this point, but there's now some concern that Apple (NASDAQ:AAPL) may suffer the same fate under Tim Cook. To be fair, Ballmer was named CEO at the height of the tech bubble almost immediately before it burst, so in terms of Microsoft share performance, he was simply dealt a bad hand. It was the ultimate tough comp. On the other hand, Cook has now been Apple CEO for half a decade, and shares have fully doubled under his leadership. 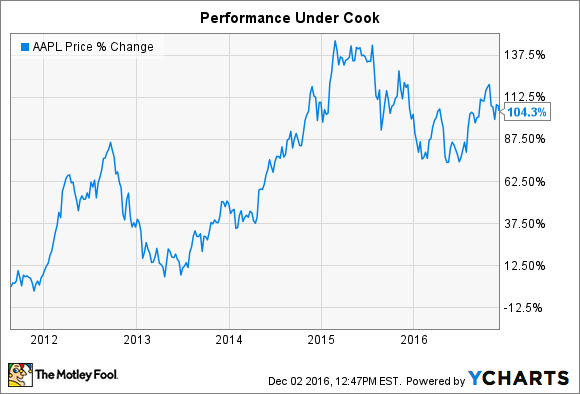 Investing is about looking forward, though. What about the next 10 years?

Oppenheimer analysts have just put out a research note to investors (via Business Insider), and it's not pretty. The analysts question the Mac maker's ability to remain at the forefront of some of the big emerging trends in tech that will undoubtedly shape the industry in the years ahead. They don't pull any punches (emphasis added):

We believe Apple lacks the courage to lead the next generation of innovation (AI, cloud-based services, messaging); instead will become more reliant than ever on the iPhone ... We believe Apple is about to embark on a decade-long malaise. The risks to the company have never been greater.

Despite Apple's best efforts to diversify away from the iPhone, the analysts believe that Apple will still depend on the handset for the foreseeable future. That's not necessarily a bad thing so long as the iPhone business remains stable and strong, but it should be clear at this point that the iPhone business has gotten so large that growth is becoming increasingly harder to come by. So far, it also seems that wearables are already struggling to gain any type of meaningful traction among consumers too, underscoring how important some of these new areas are, while Apple's most recent definition of courage was removing the iPhone 7 headphone jack.

Oppenheimer thinks that Apple will get one last bump next year for the 10th-generation iPhone, but believes that iPhone unit sales will peak the following year and Apple has already hit its limit of pricing power across its product portfolio.

Has it already begun?

While Apple shares have doubled over the course of five years under Cook, those gains largely occurred within the first three. Over the past two years, Apple shares are down modestly and have underperformed the S&P 500. Meanwhile, Microsoft shares are now enjoying a strong run under Satya Nadella. 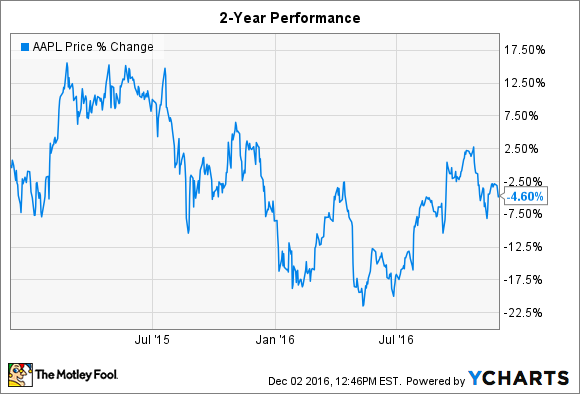 This is potentially foreshadowing future performance unless Apple can regain investor confidence either by putting up growth or demonstrating that it can still innovate better than its peers. It has done neither over the past year.

It's not necessarily about "leading"