Stocks had a mixed performance last week, with the Dow Jones Industrial Average (DJINDICES:^DJI) rising slightly even as the broader S&P 500 (SNPINDEX:^GSPC)fell by nearly 1%. The performance gap is more pronounced when you zoom out, as the Dow is up 10% for the year compared to the S&P 500's 7% gain. 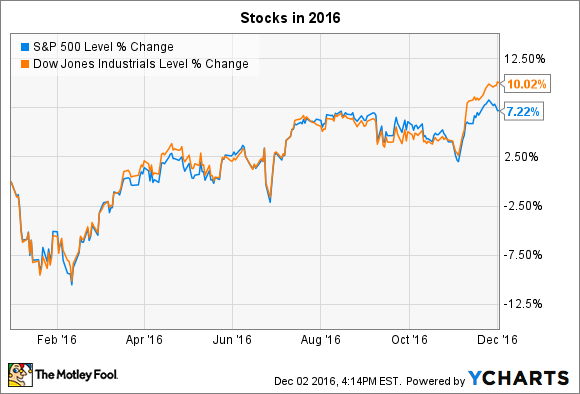 The week ahead could bring volatility for shareholders of Costco (NASDAQ:COST), Lululemon (NASDAQ:LULU), and Vera Bradley (NASDAQ:VRA), which are set to post earnings reports and fresh guidance on holiday shopping-season trends over the next few trading days.

Costco posts its earnings results on Wednesday afternoon, and investors aren't looking for great news out of the warehouse retailer. After all, sales growth slowed to a crawl recently as the company's seven-year streak of 4% (or better) customer traffic gains ended in fiscal 2016. Costco still is likely to beat rivals on the growth score -- just not by as wide a margin as usual. Wal-Mart last posted a 1% sales uptick, and Target is enduring a minor decline over the last nine months.

Investors will be watching Costco's membership metrics, too, since renewal rates have been ticking lower in the wake of its co-branded credit card switch-over. Management believes the dip will be short-lived, so they're expecting renewal rates to soon begin climbing again from the 90.3% mark they slipped to last quarter. Once subscriber trends stabilize, it might finally be time to boost annual membership fees in the U.S. for the first time in years -- which would supercharge Costco's profit growth.

Lululemon's stock has slumped nearly 30% since touching all-time highs heading into its last-quarter earnings report. That drop came despite the fact that the early September announcement included plenty of good news for the business. Sales growth was a consistent 3%, and the retailer managed its first profitability improvement in nearly four years as gross profit margin rose to 49% of sales from 47%.

CEO Laurent Potdevin said the second quarter "marks the beginning of our recovery in profitability and sustainable long-term growth," and so investors will be looking for additional improvements on both metrics this week.

Management's updated reading on the holiday season will be key, since last quarter, the retailer suggested growth might be hard to come by. For the stock to resume its market-thumping rally, there must be evidence that both sales growth and profit growth trends will hold up during the industry's busiest -- and most competitive -- season.

Vera Bradley shares are about equally far from their 52-week high and 52-week low, suggesting investors don't yet know what to make of the retailer's prospects as it launches a new brand positioning. Sales growth in the most recent quarter was underwhelming. Comps fell by 5% both at its physical locations and on its e-commerce site.

Still, those figures both reflected improvements over the prior-quarter's trend. Cost cuts, meanwhile, helped produce a 2-percentage-point increase in profitability. "Although the overall retail environment certainly remains challenging," CEO Robert Wallstrom said in September: "We are pleased that we achieved total revenues within our guidance range. We are also pleased with our 230 basis point gross profit expansion."

This week's results will be the first to include data from the company's repositioned branding that management hopes will lay the groundwork for long-term comps growth. Vera Bradley also launched its redesigned main website, poured resources into many of its stores, and launched a new market initiative. All that spending will push expenses higher, but the investments will be worth it if they can put the company on track to consistent comps gains ideally starting in the current fiscal year.