Warren Buffett has a long and storied history of using Berkshire Hathaway's financial might to make earth-shattering acquisitions. Over the years he has spent tens of billions of dollars to acquire companies that crank our cash flow, including GEICO, Burlington Northern, and Lubrizol. In fact, Buffett likes Berkshire's balance sheet packed with cash so he can make a sizable acquisition whenever a great opportunity presents itself.

That begs the question -- what companies are on Buffett's shopping list right now?

There's no telling what company Buffett may have his eye on next, but each year he lays out his acquisition criteria in his annual letter to shareholders:

While there is no way to know what kind of offering price Buffett might negotiate for swallowing a company whole, and the question is irrelevant to the everyday retail investor, we can look at publicly available data to determine if a company satisfies the first five items on his checklist. With that in mind, let's put the pharma giant Pfizer (NYSE:PFE) through Buffett's test to see how it stacks up.

With a market cap that exceeds $380 billion, Buffett can no longer move Berkshire's needle with small deals. As such, he has set up this first hurdle as a way to prevent small deals from ever cluttering up his desk.

Pfizer breezes through this first test with ease. Thanks to a huge portfolio of highly profitable drugs like Ibrance, Prevnar 13, Eliquis, and Xeljanz, Pfizer's total sales came in at more than $48 billion last year. That allowed the company to produce more than $8.9 billion in pre-tax earnings.

Buffett likes to buy companies that are capable of growing their revenue and profits through nearly all market conditions. That's why he wants any potential acquisition candidate to prove that they can remain highly profitable even during periods of economic uncertainty.

As a leading provider of pharmaceutical products, Pfizer has had no problem remaining profitable over the years. However, history shows that the company's revenue and profits have not always headed in the right direction: 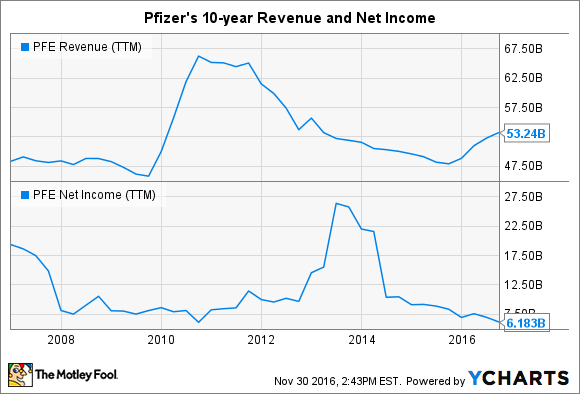 As you can see, Pfizer's results have been inconsistent. That makes sense, as the company's top-line took a big hit a few years back when it lost patent protection on its best-selling cholesterol drug Lipitor. Thankfully, Pfizer is back in growth mode again -- but these numbers are likely to be too inconsistent to impress Buffett.

Buffett believes that strong companies are capable of generating high returns on capital without the need to load up their balance sheets with debt. Here's a look at how both metrics have trended over the past decade: 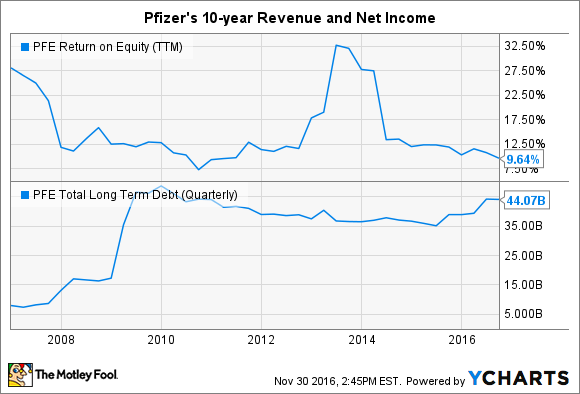 Pfizer generally puts up good returns on equity, and, on occasion, the metric can even look extremely strong. However, Pfizer hasn't been shy about loading up its balance sheet with debt over the years. My hunch is that Pfizer's company's current debt load of more than $44 billion might make Buffett cringe.

Ian Read currently serves as Pfizer's Chairman of the Board and CEO. He's held the top chair position since 2010 and has been with the company for just shy of 40 years. During his tenure, he has held a variety of management positions, including a number of stints where he served in leadership roles at some of the company's international offices. He also played an integral role in the company's M&A decisions, which included the recent takeovers of Hospira and Medivation, as well as the spinning out of its animal health business Zoetis.

Right behind CEO Read is Frank D'Amelio, Pfizer's CFO and EVP of Operations. D'Amelio has been with Pfizer for nearly a decade and has a long history of holding top positions at massive companies.

Pfizer's stock has handily beaten the market with these two leaders calling the shots, so shareholders look like they are in good hands here. 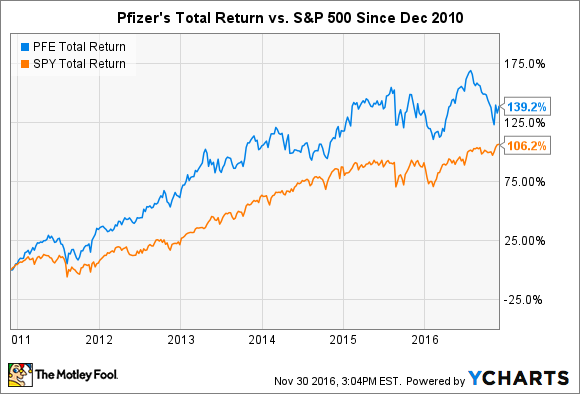 On the one hand, it is easy to understand how Pfizer generates revenue and profits -- the company buys or develops drugs that treat or cure diseases and then sells them around the world. That's an easy enough to concept to understand.

However, it is much harder to wrap your head around all of the details that exist between developing a drug from scratch and getting it into a patient's hands.

After discovery, drugs have to go through multiple clinical trials in order to prove that they are effective and safe. Next, they have to go through a long and arduous regulatory review process.Those that survive have to prove that they are cost effective enough to be accepted by payers and pharmacy benefit managers. Once payers are on board, then the drugs have to be marketed, prescribed, and accepted by the medical community. Finally, all of the profits need to be generated before the drug's patent expires, or before better drugs can be introduced by competitors.

Does that sound like a "simple" business to you?

While Pfizer boasts a long history of successfully navigating this tricky process, I can't help but think that Buffett would find this business model unappealing.

Add it up, and Pfizer scores a two out of a possible five on Buffett's test. For that reason, I have a hard time believing that this company would ever make its way onto his shopping list.

Of course, just because Pfizer doesn't pass Warren Buffett's test doesn't mean that you should skip it, too. After all, Pfizer's newer products are growing rapidly, and the acquisitions of Hospira and Medivation set up shareholders nicely for additional growth in the years ahead. Mix in a shareholder-friendly management team and a market-beating dividend yield of 3.7%, and I for one believe that this is a great stock to own.