This year will be remembered for a lot of different things. One of them will be the role that black swans played -- that is, events that large sections of the world never believed were really possible. Consider:

And if political trends don't convince you, consider that both the Cleveland Cavaliers and Chicago Cubs were down 3 games to 1 in the NBA Championship and World Series, respectively. Before Cleveland, no NBA team had ever come back to win the NBA title after being down 3-1. And Vegas had the Cubs' chances at just 17% when they dug themselves a hole.

What's the point of all this?

The world is scarily unpredictable. We like to come up with stories in our heads to ease the anxiety that this realization can cause. And as it relates to investing, coming to grips with our own inability to predict the future is even more paralyzing.

But there is a way through this fear that leads to great results. I'll get into my approach in a moment, but I won't leave you hanging any longer on my pick for December's top stock: Shopify (NYSE:SHOP).

The software-as-a-service provider gives companies a platform on which to manage their e-commerce offerings -- spanning social media, desktop web, and mobile forms of communication.

But first: one way to approach black swans, the future, and uncertainty

The term "black swan" entered popular conversation with the publishing of trader/professor Nassim Taleb's first book, Fooled by Randomness, followed by a book based on the subject: The Black Swan. After reading Taleb, I became convinced beyond a reasonable doubt that any attempt at predicting the future with pinpoint accuracy is a (small "f") fool's errand.

But most people continue to make breathless predictions. When it comes to investing, we tell ourselves stories about the future of the companies we own -- how Company X will "grow into its market share," and Company Y will "increase profitability over time." Because we have almost zero control over these companies, the stories that we rely on to make these decisions are toxic.

That's why, after reading one of Taleb's latest books -- Antifragile: Things That Gain From Disorder -- I tried to devise my own stock-selecting process that takes these stories out of the equation entirely. In essence, there are only three things I look at when selecting stocks now, and Shopify does well in all three.

Financial fortitude is by far the most boring and easiest to measure. By financial fortitude, I simply mean that Shopify won't be irreparably harmed if it meets chaotically difficult times in the future. I say this because the company currently has $187 million in cash on hand, and absolutely zero long-term debt.

Equally important, Shopify isn't overly reliant on any one company for an outsize portion of its business. That means if any one customer leaves, it won't be a death blow. In fact, because Shopify caters mainly to smaller businesses, it's even less of a concern.

As you can see, the list of merchants using Shopify has grown in the company's short life as a publicly traded entity. 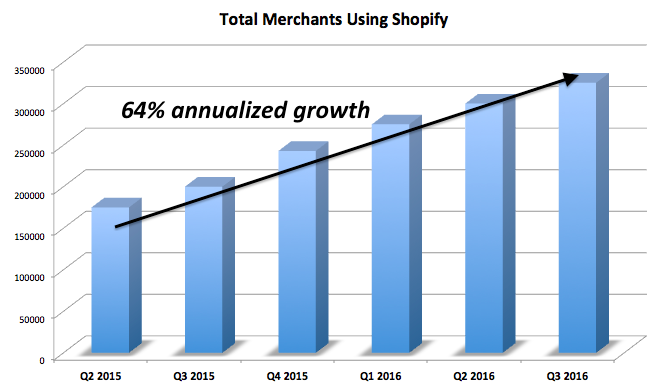 As Taleb quips in his books, bridge-makers in ancient times were forced to live under their structures. By putting their skin in the game -- literally -- people in the community had faith that the bridge they were walking on was secure.

The second part of what I measure is meant to ensure that those running the company have as much vested interest -- or skin in the game -- in the company's long-term success as I do as a shareholder.

Shopify was founded in 2004, when Tobias Lutke was starting up his own snowboarding company in Ottawa. When he searched for a platform to sell his snowboards electronically, he found nothing that he liked. Instead of giving up, he built his own platform. Over the past 12 years, that platform has changed to become what Shopify is today.

Lutke still runs the company as CEO, which is encouraging. I believe that founders often view their creation as a literal extension of themselves and do everything they can to ensure that the company will reflect positively on them as human beings. Taleb would say that these CEOs have their "soul in the game."

But it doesn't stop at the C-level suite. Shopify also has a simple mission statement to guide employees: "to make commerce better for everyone." That all-encompassing mission, plus the culture that Lutke and his team have built, help explain why employees give the company such high ratings on Glassdoor.com. 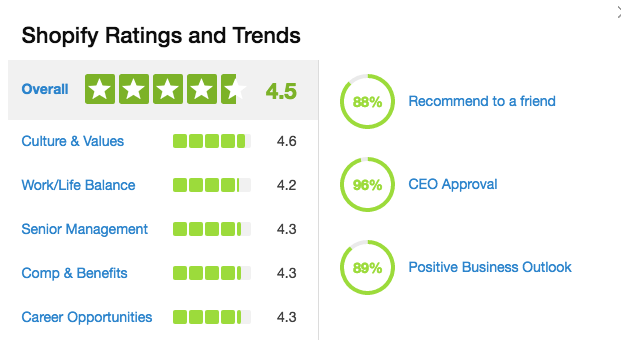 Taleb believes that the ultimate approach to an uncertain future is a barbelled one. On one side, you spend most of your time and effort -- let's say 85% -- on tried-and-true pursuits. On the other, you tinker with ideas that have a high probability of failure. The failure of these "big ideas" won't wreck the company, but if one of them really "hits" -- resulting in what Taleb calls a positive black swan -- it can transform a business.

Currently, Shopify benefits from two of the most powerful sustainable competitive advantages available. The first is high switching costs. As the company deepens its relationship with merchants more and more every year, those merchants would be more and more loath to switch to a different provider. As long as Shopify is providing a product that satisfies merchants' needs, and they aren't charging too much for the service, those merchants aren't likely to look anywhere else.

When that's the case, grabbing market share as quickly as possible is the name of the game. And since both Amazon.com and Facebook have given Shopify their blessings for using their platforms to sell goods, Shopify gets a further widened moat.

The second advantage comes from the data Shopify has on all of its merchants, and each merchant's customers. As many Silicon Valley executives now say, "data is the new oil." With this data, Shopify can create new products and solutions that meet merchants' needs better than the competition can. With every transaction logged via Shopify, this moat grows even stronger.

I'll readily admit that Shopify probably doesn't have much going on from the other end of the barbell -- where companies focus on "moonshots." But given its relatively young age, and the fact that it's focusing on its bread-and-butter business right now, I'm willing to give it a pass.

Combine all three of these factors, and I believe we have the makings of a huge winner in 2017 and well beyond. When Motley Fool trading rules allow, I will be adding shares of Shopify to my own portfolio -- putting my skin the game as well.