Shares of Acadia Pharmaceuticals(NASDAQ:ACAD), a commercial-stage biopharma focused on diseases of the central nervous system, rose by more than 17% in November, according to data from S&P Global Market Intelligence. That was a large enough gain to outperform the red-hot biotech sector in general, as measured by the SPDR S&P Biotech ETF (NYSEMKT:XBI) 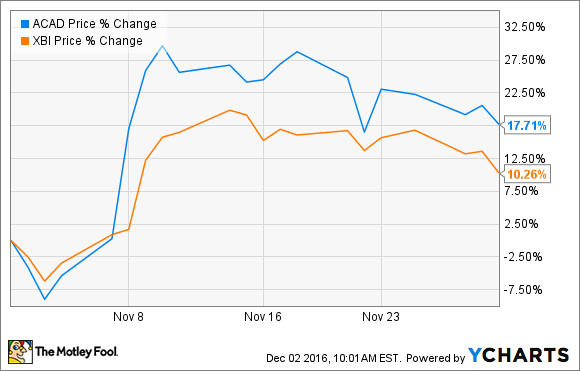 Acadia showered its shareholders with good news during the month. Here's a recap of the highlights:

Here's how CEO Steve Davis summed up the quarter:

We are very pleased with the launch and are gratified by the positive feedback we have received from physicians, patients, and caregivers on Nuplazid. We saw solid month-over-month prescription growth, reported increased payor coverage, and continued to expand awareness of Nuplazid among movement disorder specialists, neurologists, and psychiatrists.

Beyond the quarterly results, Acadia also continued to build out its pipeline during the month:

Given the much better than expected sales results and expanding possibilities for Nuplazid, it's not hard to understand why shares rallied so much during November. That's especially true when you consider that shares of Acadia tumbled more than 27% in October.

Roughly 400,000 Americans suffer from Parkinson's disease psychosis, and currently, Nuplazid is the only FDA-approved treatment for the disease on the market. As providers and insurers grow more comfortable with the drug, it's highly likely sales will continue to scream higher.

The next catalyst investors can look forward to is a data readout from the company's phase 2 study using Nuplazid as a potential treatment of Alzheimer's disease psychosis. Top-line results are expected before the end of the year, which suggests Acadia's shares will likely have another volatile month ahead.

Overall, Acadia looks well positioned for strong growth in the years ahead, but the company remains a high-risk, high-reward proposition. I'd advise bulls and bears to both approach the stock with caution.