Please ensure Javascript is enabled for purposes of website accessibility
Log In Help Join The Motley Fool
Free Article Join Over 1 Million Premium Members And Get More In-Depth Stock Guidance and Research
By Matthew DiLallo - Dec 5, 2016 at 10:00AM

Encana's (OVV -0.84%) stock took off last month thanks to three catalysts. Not only did the company report solid third-quarter results and win an analyst upgrade, but OPEC stepped in to support the oil market. That deal clearly got the stock moving higher on the final day of the month: 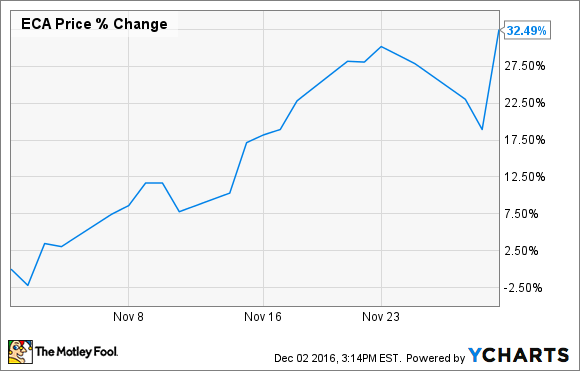 Jump-starting Encana's November rally were its expectation-beating third-quarter results. The shale driller reported operating earnings of $32 million, or $0.04 per share, which was a surprisingly strong showing, given that analysts had expected a $0.04 per-share loss. Driving those earnings were "innovation and exceptional well performance coupled with continued capital and operating efficiencies," according to CEO Doug Suttles.

Those results, along with the company's previously released five-year growth plan, won it an upgrade from RBC Capital a few weeks later, which raised the stock from "sector perform" to "outperform." Analysts said that Encana's better-than-expected third-quarter results reinforced their confidence in the company's ability to achieve its growth plan. That plan will see the company increase production 60% and cash flow 300% by 2021, as it focuses on drilling liquids-rich wells in the Permian Basin and Montney plays.

That said, if there is a possible catch with Encana's plan, it is that the company needs oil to average $55 per barrel to achieve those growth rates. However, after OPEC decided to step in to support prices, it is much more likely that crude hits that level sooner -- and potentially rises above it over the next few years.

Higher oil prices could allow Encana and its peers to grow at an even faster clip going forward because they will generate more cash flow. For example, Canadian Natural Resources (CNQ 0.94%) said that it could produce enough cash flow to maintain production, pay the dividend, reduce debt, and fund some production growth at $50 oil. However, at $60 oil, Canadian Natural Resources would generate double the free cash flow. Because of that, the company could accelerate debt reduction while potentially growing output by an 8% compound annual rate.

Encana only needs oil to move a little higher to provide it with enough fuel to deliver robust growth over the next few years. Those higher prices are now likely to arrive much sooner thanks to OPEC, which could enable Encana -- and other producers like Canadian Natural Resources -- to deliver even faster growth in the years ahead. That is certainly what investors expect, given how much oil stocks rallied last month.