GW Pharmaceuticals PLC's (NASDAQ:GWPH) reported fiscal fourth-quarter financial results that were pretty grim. Quarterly revenue collapsed 70%, to $2.1 million, and surging expenses tied to researching marijuana medicines resulted in a net loss of $21.8 million. The company's full-fiscal-year revenue was $13.3 million, down about 64% from last year, and its net loss was $82.2 million

Those are pretty discouraging numbers, but investors might not want to focus on them too much. That's because GW Pharmaceuticals' management plans to present the U.S. Food and Drug Administration (FDA) with data next year showing that its marijuana drug Epidiolex can reduce seizures in hard-to-treat epilepsy. If the FDA finds that data compelling, then GW Pharmaceuticals could be reporting sales in the nine-figures soon. 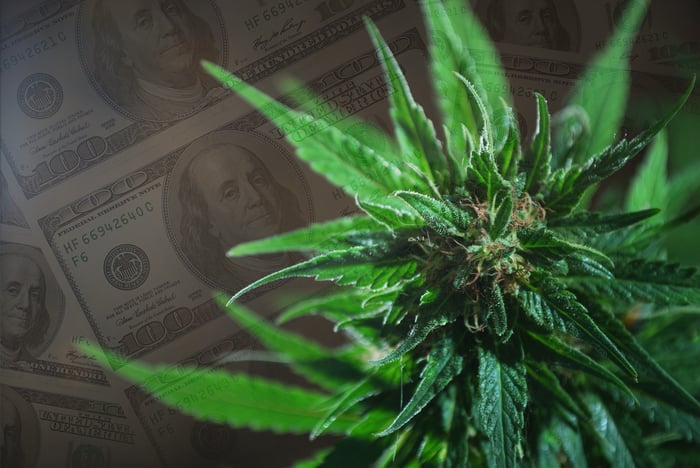 GW Pharmaceuticals's only commercial marijuana medicine is Sativex, a formulation of the cannabinoid THC that's used in Europe to treat muscle spasms in multiple sclerosis patients. GW Pharmaceuticals had hoped to expand the label for Sativex to include cancer pain, but three trials conducted along with co-developer Otsuka failed to pan out in 2015.

As a result, GW Pharmaceuticals shifted its focus away from THC to CBD, a non-psychoactive cannabinoid found in cannabis, The decision appears savvy given that the company's purified CBD, or Epidiolex, has delivered impressive results in three different epilepsy trials this year.

In March, GW Pharmaceuticals reported that Dravet syndrome patients saw a 39% decline in monthly seizure rates. In June, and then again in September, management reported results from two Lennox-Gastaut syndrome trials. They showed a respective 44% and 42% improvement in monthly drop seizures from baseline. All three trials showed that Epidiolex was statistically and significantly better than placebo, something that's important given that Sativex hadn't been able to beat placebo in its cancer pain studies.

What's even more intriguing, however, is that patients participating in these epilepsy studies were heavily pre-treated. Patients in the second Lennox-Gastaut study, for instance, had previously tried and failed an average of seven anti-epileptic medicines before trying Epidiolex. That suggests that Epidiolex is working where other existing medicines are falling short.

Epidiolex appears safe and well tolerated, too. In its financial update to investors, management said that withdrawal rates in Epidiolex's long-term studies is tracking at only about 20%. That suggests that, if approved, Epidiolex's revenue will benefit from both new patients and existing patients.

Epidiolex's potential to generate ongoing, future revenue is welcome news. Sales of Sativex are a rounding error, and collaboration revenue from Otsuka has dried up following the failed cancer pain studies. As a result, the company could use a new source of revenue if it hopes to maintain its pace of spending.

GW Pharmaceuticals spent $31.4 million on research and development costs, and another $9.7 million on sales, general, and administrative expenses last quarter.

Epidiolex could help this marijuana drugmaker turn the corner to profitability, but management needs to convince the FDA to approve this marijuana medicine first. GW Pharmaceuticals expects to have results from a second Dravet syndrome trial in hand early next year, and assuming there are no surprises, management hopes to file for Epidiolex's approval with the FDA by the end of the second quarter of 2017. Typically, it takes the FDA 10 months to make a decision on a new drug, so that timeline suggests Epidiolex could begin producing revenue in 2018.

Currently, anti-convulsant therapies can cost hundreds of dollars per year, and GW Pharmaceuticals's management thinks they can make enough Epidiolex to treat up to "a few tens of thousands" of patients in year one. Based on similar pricing and those production forecasts, Epidiolex could bring in nine figures in sales during its first year on the market. For that reason, it might be best to ignore the company's otherwise anemic quarterly performance, and instead focus on the bigger opportunity that may lie ahead.

This Marijuana Stock's Sales Are Shrinking: Should We Care? @themotleyfool #stocks $GWPH Next Article
Current