Mid-cap stocks are always a good investing vehicle to own because of their long-term growth prospects and generally healthier balance sheets than their small-cap counterparts. With this in mind, our Foolish contributors recommend checking out Horizon Pharma plc (NASDAQ:HZNP), Core Laboratories NV (NYSE:CLB), AutoNation (NYSE:AN), and Splunk (NASDAQ:SPLK) this month. Here's why these companies, each with a market cap between $3 billion and $8 billion, are great buys for December.

George Budwell (Horizon Pharma): Horizon Pharma is attempting to convince the market that it is not cut from the same cloth as other struggling specialty pharma companies. To do so, the company has been methodically shifting its revenue mix toward less controversial orphan drugs, catalyzed, in part, by its acquisition of Raptor Pharmaceutical Corp. last October.

Specifically, Horizon's goal is have around 60% of its total net revenues coming from orphan drugs such as Actimmune by no later than 2020.

While the company obviously has some work to do in terms of relying less on hot-button branded drugs such as the pain reliever Duexis for growth, Horizon does seem to be headed in the right direction. Moreover, the company sports a relatively healthy balance sheet at the moment, along with rapidly growing free cash flows, implying that additional acquisitions in the orphan-drug space could be in the works to speed up this process.

All told, Horizon looks like a great buy this December, based on its rock-bottom forward price-to-earnings ratio of 7.9 and management's decision to substantially grow the company's footprint in the orphan-drug market.

Tyler Crowe (Core Laboratories NV): One of the most important lessons that the oil and gas industry learned during this most recent downturn is that there is a difference between just growing the business through production and generating rates of return on production. That's where Core Laboratories comes in, and it's a position that should make Core Labs stock a great buy in December for the years ahead.

Core Labs specializes in three major services: reservoir description, production enhancement, and reservoir management. All of three of these services are used to show the best places in a reservoir to drill to get the most out of that reservoir, deploy the best fracking strategy to generate the highest production rates over time, and find ways to best manage the decline from that reservoir later in the life cycle. While many producers eschewed these services when oil was $100 a barrel or more, today's oil price means that every dollar spent on production and development needs to count, and Core's services are worth the price.

For investors, this makes for a company that has relatively strong pricing power in an industry that's typically at the mercy of how much producers want to spend on services. Also, Core Labs doesn't require the capital spending that most other oil and gas companies require, which translates to great free cash flow generation and the best returns on capital employed in the business by a wide margin. 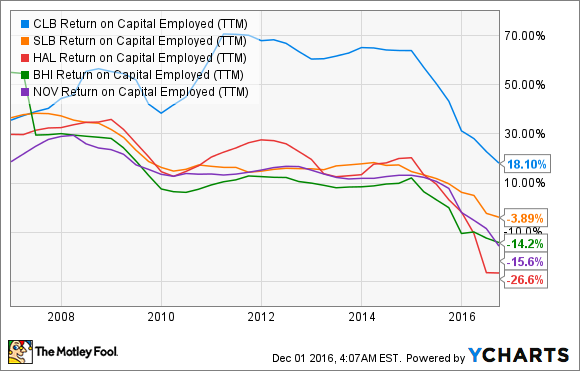 I'll admit that Core's stock is hard to value using traditional metrics. It's a cyclical business at the bottom of the cycle, so all earnings-based valuations look high. Also, it has bought back stock at a faster pace then retained earnings, so there is technically no equity value. However, Core has ample opportunities in the coming years as the energy market rebounds, and today's stock price makes it look like a compelling investment in December.

Neha Chamaria (AutoNation): One mid-cap stock that's caught my attention is AutoNation. The stock fared well last month and has now gained nearly 8% as of this writing, rising ever since the auto retailer revealed a $500 million "brand-extension strategy" along with its third-quarter numbers. My focus is on the program, which includes  a network of standalone used-vehicle sales and AutoNation USA stores, the launch of AutoNation-branded parts and accessories, and expansion of standalone collision centers and AutoNation Auto Auctions. It might not be evident, but there appear to be significant margin expansion opportunities in there.

The used-car market, for instance, offers substantial growth potential: The National Automobile Dealers Association projects used-car sales to cross 40 million next year. It's a high-margin business, too: The nation's largest used-vehicle retailer, CarMax, has an operating margin of around 7.5%, nearly twice that of AutoNation's. Likewise, parts and service made up only about 16% of AutoNation's revenue for the first nine months of the year but generated a whopping 43% of its gross profits. AutoNation's "brand-extension strategy" is clearly pointing at better margins.

As the largest automotive dealer in the U.S., AutoNation already has a solid footprint in the new-car market. Now that it has set its eyes on other automotive areas, I believe the company should be able to mitigate the risks associated with new-car sales and expand its margins even in adverse conditions going forward. AutoNation stock is still down 23% year to date and looks quite reasonable today at 11 times forward earnings, given the growth catalysts.

Steve Symington (Splunk): Despite seeing shares of Splunk pop late last month following its eighth straight quarterly beat, I still think the operational intelligence software specialist is a compelling buy. Shares are still down around 3% over the past year as of this writing, in part as the fast-growing company had its stock wrongly dragged down along with the broader market earlier this year.

To be fair, some investors might be uncomfortable with the idea that Splunk eschews bottom-line profitability and instead aggressively invests in growing revenue and taking market share in these early stages. Last quarter alone, for example, Splunk incurred a GAAP net loss of $93.5 million, or $0.69 per share.

To Splunk's credit, it is cash-flow positive. Cash from operations and free cash flow came in at $45 million and $32 million, respectively, last quarter. And the company ended the period with no debt and over $1 billion in cash and investments on its balance sheet.

Most importantly, Splunk's strategy is proving effective. Last quarter's revenue jumped more than 40% year over year, to $244.8 million, well above both its guidance and the expectations of Wall Street analysts, as per usual. And Splunk added nearly 500 new customers in the process last quarter alone, including new and expanded relationships with the likes of BMW, Dow Jones, Progressive, Rackspace, and the U.S. Department of Homeland Security.

And if you're feeling charitable around the holidays, Splunk recently formed Splunk Pledge as part of its Splunk4Good initiative. Through the pledge, Splunk dedicated $100 million over the next 10 years in in software licenses, training, support, education, and volunteerism to "support academic research and generate social impact." I don't know about you, but that's exactly the kind of company I like to see in my portfolio.

Make no mistake: Profits will come. But in the meantime, Splunk is wisely pouring its resources into making sure its products become an integral part of the success of as many customers as possible. As such, I think Splunk's recent gains should amount to a drop in the bucket for investors who buy now and watch that growth continue to unfold in the coming years.