As I write, Rockwell Automation (NYSE:ROK) stock is up by a third on a year-to-date basis, but the question investors will be asking is whether the run can continue in 2017.

In this vein, let's look at management's commentary and outlook from the recent fourth-quarter results and investor conference. Here's what you need to know before making an investment decision.

Following a 3.9% decline in organic sales growth in 2016, management forecasts a return to growth in 2017. In addition, acquisitions are expected to add 1.5% to reported sales growth, with currency taking away 0.5%.

The end result is an outlook for sales growth of around 2%, but there won't be much operational leverage into notably higher EPS, because Rockwell faces some margin headwinds. Segment margin headwinds -- restoration of incentive compensation, unfavorable currency exchange rates, and increases in operating pension expense -- and a slightly higher tax rate are holding back EPS growth.

Turning to valuation, the adjusted EPS range puts Rockwell Automation on a forward P/E range of 23.4 to 21.9 times earnings. Meanwhile, it looks as though it will generate 4.5% of its enterprise value (market cap plus net debt) in free cash flow in 2017.

Finally, thanks to a large increase in the share price, Rockwell is no longer cheap on an absolute or peer group basis. 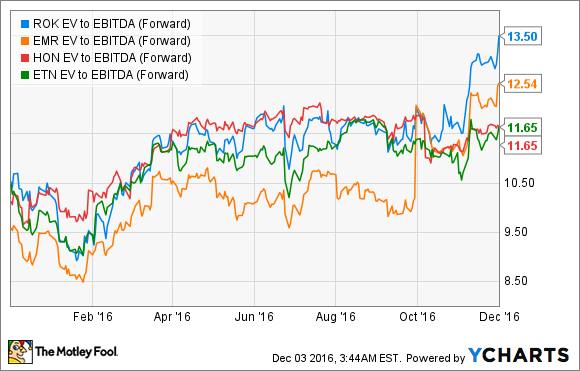 Investors have bought into cyclical stocks such as Rockwell and Emerson Electric (NYSE:EMR) in the hope that a Donald Trump presidency will lead to a pickup in the U.S. industrial economy. In addition, as the speculation on Emerson Electric's making a bid for Rockwell has subsided, the latest market rumors suggest that France's Schneider Electric SE (OTC:SBGSF) might be interested in a bid.

In common with Emerson Electric, much of Rockwell's revenue depends on more economically sensitive capital spending rather than operational expenditures. So with Rockwell's valuation seemingly being bolstered by belief in a cyclical pick-up and some bid speculation, it's worth taking a look at potential earnings upside drivers and the assumptions made in management's guidance.

Rockwell's stock is pretty attractive in terms of long-term prospects -- not least from its Industrial Internet of Things (IIOT) exposure and positioning as a strategic U.S. asset -- so let's focus on three near- to mid-term considerations:

Oil and gas and Asia-Pacific spending

CEO Blake Moret expects "continued growth in the consumer and auto verticals and with heavy industries about flat year over year," while Crandall outlined that oil and gas and mining largely "pulled down heavy industry verticals' in 2016. Clearly, management expects some stabilization in oil and gas spending in 2017.

Turning to Asia-Pacific, in the fourth quarter Rockwell generated 5.4% organic sales growth in the region -- markedly above the overall 4% decline -- with China up in the low single digits. On the earnings call, Moret argued that China's need to improve to Western levels of productivity would drive adoption of Rockwell's solutions in the future. In other words, demand could be structural and therefore less dependent on cyclical factors.

Given the steep rise this year and the current valuation, it's hard to argue that the stock is cheap. On the other hand, there's an obvious long-term attraction of an industrial software company focused on increasing productivity through IIOT-relevant solutions.

Ultimately, the decision probably boils down to your level of confidence in industrial production growth next year, as well as a stabilization in oil and gas spending -- something Rockwell's outlook is contingent upon. In my opinion, there are probably cheaper ways to play these themes than Rockwell, and investors might look out for a better entry point.