The global automotive market might very well trend with China over the next decade. While China is already the world's largest market for new-vehicle sales, the U.S. is still far more profitable for automakers due to the types of vehicles sold -- much-larger, more expensive vehicles like SUVs and trucks, and more luxury vehicles.

However, SUVs are starting to sell much better in China as its middle class expands, and Ford Motor Company (NYSE: F) and General Motors (NYSE: GM) are even planning to try selling trucks in the region soon. That means China could one day become a growth engine for global automakers, and it's increasingly important that investors pay attention to which automakers are poised to benefit.

With all that said, let's dig into Ford's November sales results in China and evaluate just how strong it really was.

At first glance, Ford's China sales data looks phenomenal. Detroit's second-largest automaker and its joint ventures sold more than 124,000 units in November, a robust 17% over the prior year's November. If you're keeping track, that's more than 1 million vehicles sold throughout 2016 for the automaker, as it achieved the mark one month sooner than it did last year. Ford's 124,113 sales last month marked an all-time November high, and the company is on track to post an annual record in China. 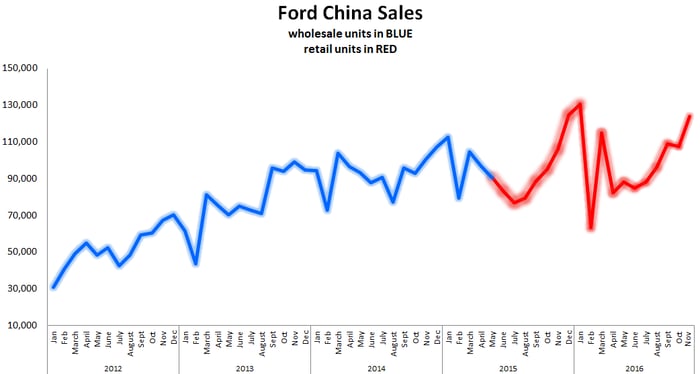 As for Ford's bread-and-butter SUVs, the Explorer posted a 73% sales jump, compared to the prior November, and sales of the Edge moved 21% higher. But the health was widespread in November with sales of small sedans also moving higher, the opposite scenario to what the U.S. industry is witnessing with the dramatic decline in sedan sales this year. Sales of Ford's Focus and Escort moved 28% and 50% higher while the Mustang posted a 48% gain.

While Ford's November gains were impressive at 17%, GM's checked in at a mere 7% increase, but the company sold nearly three times as many units -- as it started selling in China years before its crosstown rival and has a more seasoned operation there. GM's November sales in China reached 371,740 units. Cadillac remains on fire, recording its fifth straight month with sales increases checking in at least 50% higher. Last month Cadillac sales jumped 70%, to an impressive 13,476 unit total.

Here's the thing, though: Despite Ford's impressive November, it's lost market share this year due to a slower than anticipated second quarter. Through November, Ford and its joint ventures sold 1.09 million units, a 5% gain compared to the corresponding 11-month time frame last year. While the final November data isn't yet available, it's likely not going to match the industry's light-vehicle pace, which was up 15% through the first 10 months.

In fact, Honda and Toyota both managed to pass Ford in the sales ranks selling 1.11 million and 1.10 million vehicles on year-to-date gains of 28% and 10%, respectively -- though the difference between the three automakers' sales is so small that it could change on a month-to-month basis for the foreseeable future.

So what should investors conclude? It all depends on whether they see the glass as half full or half empty. Ford's sales are going to set a record pace in China this year, which is great news for a company that desperately needs to establish a second pillar of revenue and profitability outside of North America. However, despite setting an annual record in sales, the company is still losing some market share to its closest competitors. At the moment, sales and market share are up for grabs in the world's largest market, so it's going to continue to be important for investors to watch this China growth story play out.