Microprocessor giant Intel (NASDAQ:INTC) spends a lot of money. It pours tens of billions of dollars each year into research and development and sales and marketing, as well as into capital expenditures to support its cutting-edge chip manufacturing plants.

Year to date, Intel's operating expenses, excluding restructuring and amortization of acquisition-related intangible charges, were up to $15.699 billion, from $14.821 billion in the year prior.

That spending increase, amazingly enough, comes even after Intel announced a restructuring program back in April designed to yield "annual run rate savings of $1.4 billion by mid-2017." 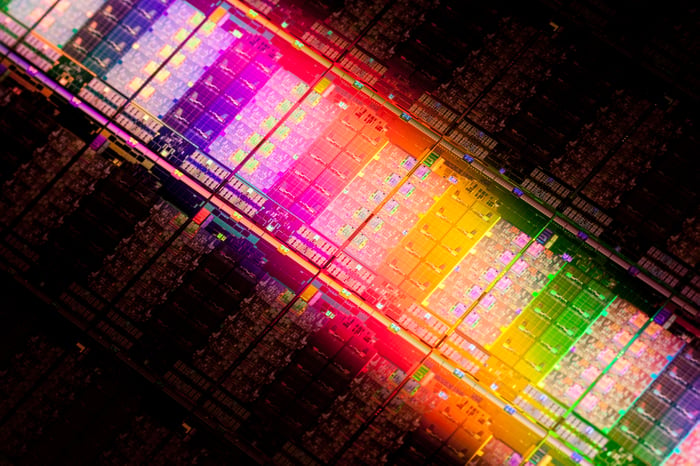 Analyst John Pitzer with Credit Suisse had the following to say to Intel Executive Vice President Stacy Smith with respect to that spending at a recent conference:

You are clearly ahead on the restructuring, but as you pointed out, you're finding more things to invest in from those savings. And so, net-net -- these are my numbers, not yours -- if you look at kind of the implied 2017 [operating expense guidance], it's about $600 million to $700 million higher than I think most people thought going into the calendar third-quarter earnings.

And, I guess, the biggest question I get is, "That's a lot of money -- what exactly are you investing in?"

And there is this, I think, concern or narrative there that, "Gee, is Intel just seeing something in one of their businesses that they are not willing to discuss that's kind of scaring the heck out of them and forcing them to spend at these elevated levels?"

Smith had some insights to share in response. Let's take a closer look at them.

Smith pointed out that the savings after the company's reinvestments in other areas works out to "about $700 million over three quarters in 2016." That savings run rate, Smith observed, works out to an annualized net operating expense reduction of "about $1 billion."

Intel's ultimate goal with this restructuring, Smith explained, is to reduce the company's operating expenses as a percentage of the company's revenue by "a couple of points." One point comes this year, and another in 2017, Smith said.

What about these reinvestments?

Smith was blunt in saying that these increased investments weren't a result of seeing things that worry him. Instead, Smith contends, "there are real opportunities that are out there that are worthy of investment."

The executive pointed out some of the areas in which Intel is cutting its spending, such as mobile processors and personal computers, as well as where it's boosting spending -- Internet of Things/automotive, data center, and 3D XPoint memory.

Intel hasn't given its financial guidance for 2017 yet, but current analyst estimates call for the company to hit $60.88 billion in revenue on average next year -- roughly 3.6% year-over-year growth.  If Intel were to simply keep its spending in 2017 flat to where it winds up in 2016, then a 3.6% revenue increase would mean a decline in spending as a percentage of revenue.

That Smith is calling for spending as a percentage of revenue to come down by just 1% in 2017 suggests that -- assuming that Intel is planning for revenue growth in line with what the average analyst estimate -- Intel is planning to grow its total spending again next year a bit.