The J.M. Smucker Company (NYSE:SJM) released its fiscal second-quarter earnings last month. Results came in mixed, but investors have been told that 2017 and beyond will be different from times past. The company is busy working on the results of a long stretch of growth driven by acquisition over the last decade and a half, so the mixed numbers are to be expected.

What happened during the last quarter

Second-quarter top-line sales were down 8% from the same period last year. The big drop was caused by a trio of problems including the sale of its canned milk business, further declines in the pet food business, and lower prices especially in the peanut butter and coffee divisions.

However, excluding the sale of the canned milk business and subsequent loss of sales, the top line dropped by a slightly less scary 5%. While falling sales are never welcome, the company's previous outlook called for falling sales that would begin to recover during 2017. That outlook was reiterated during the last report.

The bottom line was a much different story. Earnings per share were up 3% driven by cost savings and share repurchases. Smucker is looking to drive costs down further through the year by looking for synergies between the different brands in the J.M. Smucker Company stable.

Based on the company's investor day held back in June, Smucker is no longer looking for sales growth, but instead is trying to return value to shareholders by increasing profits. Viewed in this light, the mixed report looks like more of a success. Even so, the slide in sales will still need to reverse course if the company wants to continue to drive profitability growth in the long term.

Since the early 2000s, the food conglomerate has expanded by buying other names, including Jif peanut butter in 2002, Pillsbury baked goods in 2004, and Folgers coffee in 2008. The latest acquisition, Big Heart Pet Brands, was made in early 2015. As a result of the multiyear spending spree, net sales have grown 10% per year in the past five years. Free cash flow, or cash left over for the company after paying for normal operations and expansion efforts, has expanded from $211 million in 2011 to $1.3 billion last fiscal year.

Content for the moment with the list of names under its control, Smucker is now looking for long-term average sales growth of only 3% a year, but average earnings-per-share growth of 8%. Streamlining operations, reducing debt, and reinvesting in existing brands will be the name of the game to accomplish those goals.

Bearing in mind the company's long-term goals, here is a breakdown of last quarter's segment performance:

At the end of the day, it is important for investors to bear in mind the reason for owning J.M. Smucker Company stock: The strategy of fueling high-octane sales growth via acquisitions is gone, replaced with a focus on overhead reduction, brand reinvestment, and value being returned to shareholders. Rather than focus on overall sales, investors should stay tuned to bottom-line profit and free cash flow generation. 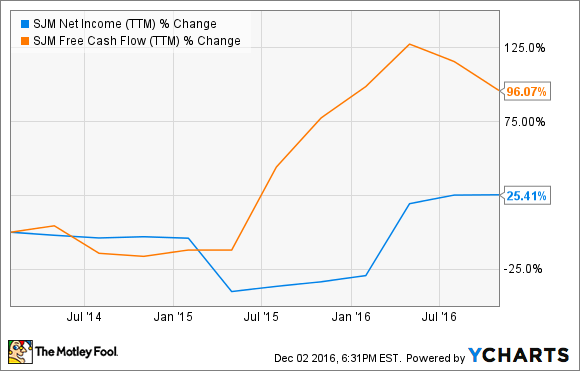 The company is betting specifically on pet food and coffee to provide the biggest shot in the arm, but investors will need to be patient. Smucker sees top-line declines slowing down for pet food, and shoppers can find a new premium line of pet chow called Nature's Recipe by the end of the year. Also keep an eye on continued cost reductions in coffee and food, which will help impact the bottom line over time.