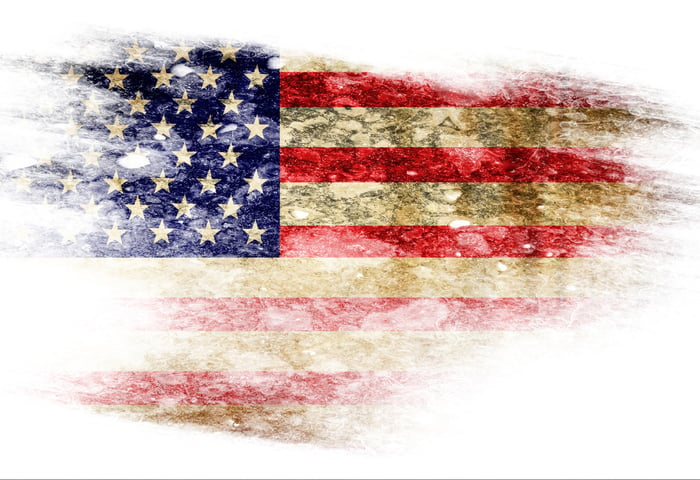 All things considered, it's been a pretty good year to be an investor in American stocks. The S&P 500 has returned 10.2% including dividends. But that's the average -- there are plenty of stocks that have suffered substantial losses in 2016.

All three of the worst performing American stocks with market caps over $10 billion are healthcare-related: Vertex Pharmaceuticals (NASDAQ:VRTX), Illumina (NASDAQ:ILMN), and Mylan (NASDAQ:MYL). 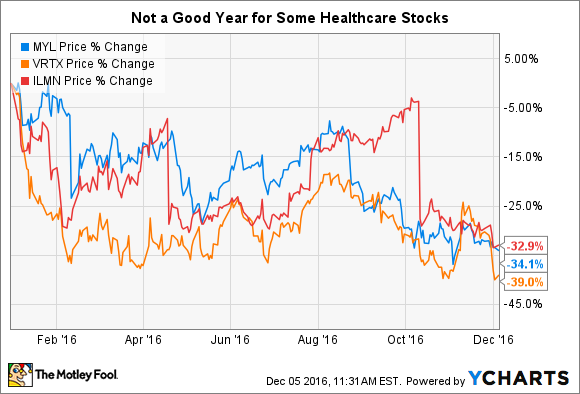 Read below to find out more about all three, and whether or not they represent good deals at these lower levels.

In the press for all the wrong reasons

Technically, Mylan shouldn't be included in this list. Thanks to a move called "inversion", Mylan changed its official domicile to the Netherlands in 2014 after acquiring a generic drug maker in the country. However, the change was just on paper -- the company's workforce and laboratories and production facilities remained stateside. That's why I feel justified leaving it on the list. With the move, however, the company was able to dodge a large chunk of taxes.

That didn't sit well with the public, but even that wasn't the worst PR news of the year for the company. That came from widespread attention to Mylan's decision to increase the price of its lifesaving EpiPen from $100 in 2007 to over $600 by this year. That led to Congressional hearings that saw Mylan's CEO Heather Bresch appear woefully underprepared for the questions the country's leaders were hoping to find answers to.

Investors may be able to capitalize on this by buying a company that's much more than just the EpiPen. However, at the same time, the Department of Justice has Mylan under investigation, and there's no telling what the agency could find. In addition, the company has made some expensive acquisitions over the past year -- Meda and Renaissance Acquisition. Investors need to watch to ensure that these become accretive soon.

Vertex Pharmaceuticals doesn't have as clear-cut a catalyst for its downward trend. Instead, there's a collection of factors that combined to nudge the company's stock down throughout the year.

In January, the stock lost 26% of its value. While there wasn't company-specific news to explain the drop, the entire biopharmaceutical industry suffered major losses during the month, as many investors thought these companies were overpriced and hitting "bubble" territory.

Subsequently, the stock dipped on two drug-related announcements. The FDA announced in February that it would need more specific data on Kalydeco before granting expanded uses, and management subsequently offered sales estimates that Wall Street wasn't happy with. And in March, the U.K.'s National Institute for Health and Care Excellence issued draft guidance announcing it wouldn't recommend Orkambi based on its high price, and it confirmed that decision in June.

The stock has more or less stayed at those depressed prices all year. If you're interested in buying shares, you should know that the success of Orkambi -- above all else -- is what your near-term investing thesis should be based on. Results from the drug have been somewhat disappointing because some patients have had to discontinue due to chest tightness. But if the drug gains even wider acceptance, it could be a steal at today's prices.

Here's the stock I really consider a steal

Back when the human genome was first sequenced in 2001, the process ran $100 million per genome. Today, that's down to $1,400 -- thanks almost entirely to Illumina's HiSeq X machine. The company owns the market on genome sequencing, and relies on a razor-and-blades model of consumables to keep business humming.

Several factors -- including the industry-wide slump -- plagued Illumina's stock this year. Some larger orders took (or will take) longer than expected to close, resulting in revenue shortfalls. In general, it looks like demand for the HiSeq X machines is tapering, as sales are forecasted to be relatively flat. This, however, ignores the fact that consumables are still growing at healthy clips. This means that the existing machines are being used more often, leading to more high-margin sales for the company.

At the end of the day, I see Illumina as the top dog in an industry that's gaining wider and wider acceptance. Currently, the stock trades for 38 times earnings and 44 times free cash flow. While those certainly aren't "cheap" ratios, I also think that Ilumina has the makings of a great long-term holding, and that a decade from now today's price may appear to have been a bargain.