The railroad industry has been under some pressure in recent years, and Union Pacific (NYSE:UNP) has had to navigate changes in economic conditions that have presented some challenges to its business. Recently, though, railroad stocks have rebounded, and Union Pacific saw its stock climb above the $100-per-share mark last month for the first time since mid-2015. Some investors automatically think that a company will consider a stock split when its share price climbs into triple digits, and so it's natural to wonder whether Union Pacific will be splitting its stock soon. Below, we'll look more closely at Union Pacific's stock split history to try to get some hints about whether another split is likely to come.

What made Union Pacific do a stock split in the past

Union Pacific has done several stock splits during its history, as you can see below:

Ordinarily, stock splits before the 1970s are hard to analyze, because price information is hard to retrieve. In Union Pacific's case, however, the company actually provides its own pricing data, and that is helpful in assessing what motivated the railroad company to do stock splits.

Union Pacific has changed the way it assesses stock splits throughout its history. Early on, the company allowed its stock price to climb well above levels that prompted many of its peers in the stock market to do stock splits. In 1948, the stock price was $190 per share before the stock split took effect, and the 1956 split occurred with the share price at about $172.50. The big 5-for-1 split in 1956 gave Union Pacific plenty of room for growth without needing to consider further splits for a couple of decades. 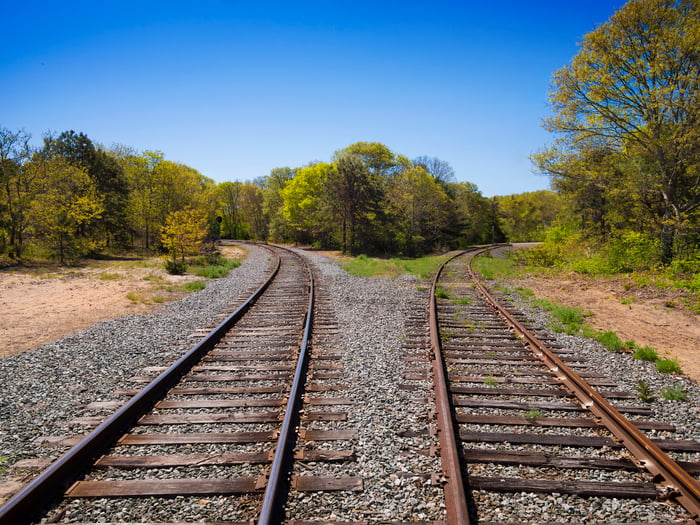 By the 1970s, however, Union Pacific had adopted a more conventional approach to stock splits. The 1977 move happened with the stock at $97 per share, preventing the company's shares from reaching sustained triple-digit levels. The railroad was even faster on the draw in 1980, splitting with the stock at around $75 per share, and the 1991 split involved shares at prices between $94 and $95. Based on that part of its history, it would be natural to think Union Pacific might consider a split now.

However, within the last decade, Union Pacific has reverted to its former strategy of allowing its stock to climb well past the $100-per-share mark before doing splits. In May 2008, Union Pacific traded at almost $160 at its high, and it had been above $100 per share throughout 2007 and early 2008 before the railroad made its move. After that, the financial crisis hit, sending Union Pacific's stock down sharply and taking several years to recover.

Yet by late 2011, Union Pacific was once again trading in triple digits. The railroad waited two-and-a-half years before splitting, letting the stock hit the $200 per share mark before doing the split.

It therefore seems very unlikely that Union Pacific will split again in the near future. It's only because of the downturn in the railroad industry that the stock fell back below the $100 per share mark at all immediately follow the previous split. That indicates that the railroad is comfortable with a triple-digit share price, or else it would have chosen a different split ratio than 2-for-1.

Given that Union Pacific did its last split just over two years ago, there's no reason for investors to think that the company will be in a hurry to do another one. It will likely take another 50% to 100% move higher for Union Pacific share prices from current levels to justify the next split for the railroad's stock.