Shares of Lions Gate Entertainment (NYSE:LGF.A) rose 14.9% in November 2016, according to data from S&P Global Market Intelligence. A solid second-quarter report provided all the rocket fuel needed for this boost.

In the second quarter, Lions Gate grew its sales by 34% year over year, while turning the year-ago period's net loss into a respectable profit. The final tally showed adjusted earnings of $0.11 per share on $640 million in top-line revenue. Analysts would have settled for a $0.25 loss per share on sales of just $554 million. It wasn't even close.

As investors absorbed the results and analysts weighed in with updated analyses, Lions Gate shares rose 20% over the next three market days.

This jump rested on 56% higher international movie revenues and 43% stronger sales of TV content. That being said, analyzing Lions Gate in the light of recent quarters doesn't make a whole lot of sense, because there's a game-changing merger on the table. 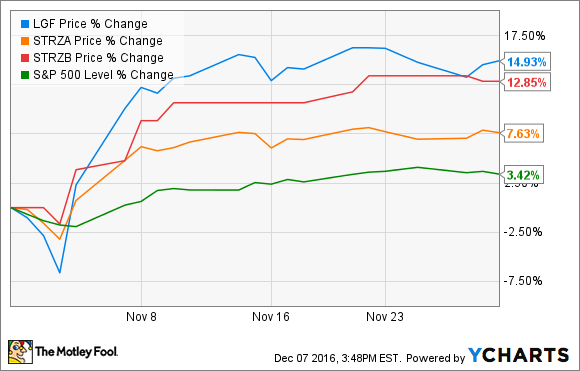 Being tied by the hip to Lions Gate, Starz also posted decent gains in November: Starz's A shares closed the month 7.9% higher while the Class B stock climbed all the way to 12.8%.

When the merger happens, the new Lions Gate will rely far less on movie releases and more on TV shows. The company also gains new distribution channels through Starz and its multinational network of premium cable channels.

Investors on both sides of this deal should get ready to update their expectations for the new two-headed beast.