Neha Chamaria, Evan Niu, CFA, and Todd Campbell
(TMFNehams)
Author Bio
A Fool since 2011, Neha has a keen interest in materials, industrials, and mining sectors. Her favorite pastime: Digging into 10Qs and 10Ks to pull out important information about a company and its operations that an investor may otherwise not know. Other days, you may find her decoding the big moves in stocks that catch her eye. Check back at Fool.com for her articles, or follow her on Twitter. Follow @nehamschamaria
Follow @nehamschamaria 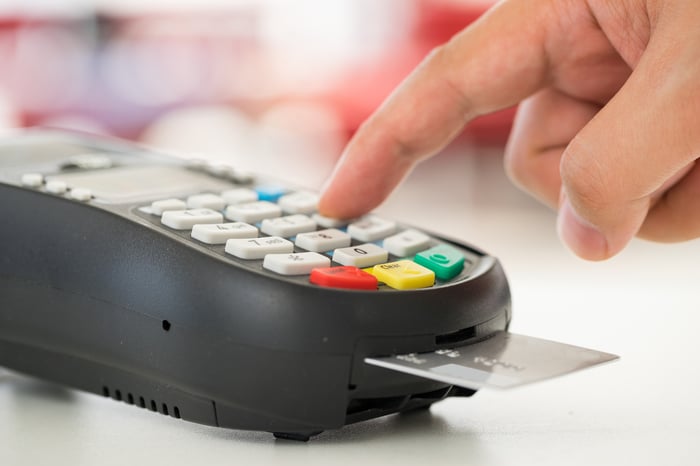 Warren Buffett is a legendary investor known for his buy-and-hold strategy that focuses on stocks of high-quality companies with a strong foothold in the industry, tough-to-beat competitive advantages, solid financials, and a track record of shareholder returns. Such stocks ideally turn out to be winners in the long run and can prove great investment options for prudent investors.

However, not every stock owned by Buffett's Berkshire Hathaway (NYSE:BRK-A)(NYSE:BRK-B) is necessarily a good buy today. When we asked three of our contributors to pick their favorite Buffett stock, they chose U.S. Bancorp (NYSE:USB), Verizon Communications (NYSE:VZ), and Mastercard (NYSE:MA). Read along to find out why you should consider buying these three Buffett stocks this month.

Profit at big banks could climb in 2017

Todd Campbell (U.S. Bancorp): Wells Fargo may be Buffett's biggest investment in banking, but I think investors ought to be tucking U.S. into gift bags this month. Buffett's Berkshire Hathaway owns 85 million shares of U.S. Bancorp, worth more than $4 billion, and this bank's industry-leading profitability could be why.

My fellow Fool John Maxfield recently pointed out that U.S. Bancorp is the most profitable bank in terms of return on equity in America, and U.S. Bancorp's earnings power could get even better if interest rates climb in December and net interest margins expand.

Net interest margin, or the difference between a bank's financing costs and interest charged on loans, divided by interest-earning assets, is a good proxy for evaluating a bank's earnings health. Since the recession, a low Fed Funds rate has compressed the yield curve and kept a lid on net interest margin; however, the spread between short-term Treasury yields and long-term treasury yields has widened in the past month, and industry watchers expect that the Fed will increase the Fed Funds rates by at least 25 basis points in December.

U.S. Bancorp is already nicely profitable, its earnings could head higher next year, and its shares are yielding 2.28%. That's why this bank is among my favorites to own in 2017.

Big Red is still the biggest

Evan Niu, CFA (Verizon Communications): Verizon may be a tiny holding for Warren Buffett, but the largest domestic wireless carrier is a pretty safe investment, thanks to its market-leading position and stable cash flows. To be clear, Verizon is not at all a growth company. In fact, revenue fell 6.7% last quarter to $30.9 billion, and net income also fell 10% to $3.7 billion. However, when you factor in Verizon's strong and reliable dividend payouts that currently yield around 4.6%, the company becomes a pretty compelling income investment. Note the difference over the past five years between the share price and total returns that include dividend reinvestments. 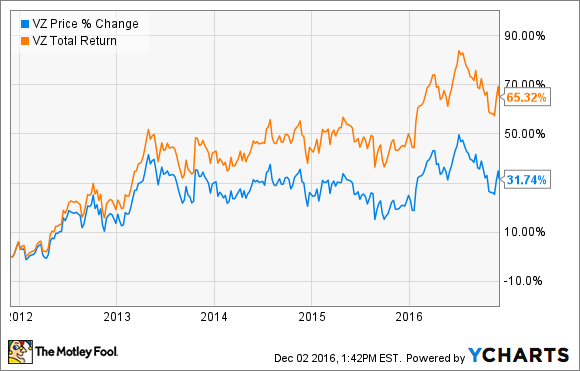 The company also has a long track record of consistent dividend increases, while it maintains plenty of free cash flow to fund those payouts -- nearly $12 billion over the past year. And with smartphones being both ubiquitous and indispensable these days, customers aren't ditching their wireless plans anytime soon. Verizon has also held its ground in terms of pricing power while retaining customers, even as smaller rivals utilize aggressive promotions in an effort to poach customers.

If you're looking for a Buffett business with consistent cash flows and generous dividend payouts, look no further than Big Red.

Mastercard could grow faster than you think

Neha Chamaria (Mastercard): Like Verizon, Mastercard is a tiny part of Berkshire's holdings and might have even been picked by Buffett's investing managers, Todd Combs or Ted Weschler. But that doesn't matter much, as long as Mastercard counts as a Buffett stock.

While that's encouraging, what really got me excited is the evident growth potential in India. India's Prime Minister Narendra Modi is on a massive mission to turn the nation "cashless," having declared high-denomination currency notes no longer legal tender last month. Given India's huge population and the tiny penetration of debit and credit cards, this represents a big opportunity for Mastercard. The interesting -- and important -- part is that Mastercard is led by Indian native CEO Ajay Banga, who had earlier even partnered with the Indian government and bankers association to help frame policies to promote digital payments. Of course, India is just one growth story, but it's a big one nonetheless.

Mastercard's leadership position in the industry, solid global network, and strong brand power are major competitive advantages that should help it grow exponentially as the world turns digital. Mastercard's financials are also undeniably strong, as evident in its consistent double-digit returns on assets, invested capital, and equity. Overall, Mastercard operates in an industry poised to expand substantially in coming years, and India's fresh cashless drive might be the perfect opportunity to get serious about the stock.