Shares of AutoZone (NYSE: AZO) traded nearly 4% higher Wednesday after the retailer of automotive parts, tools, and accessories turned in its first quarter of fiscal year 2017, beating estimates on the bottom line and just falling short on top-line revenues.

Despite the top-line miss, there was plenty of encouraging data for bullish investors to feed on. Let's look at the overall figures and a couple of highlights. 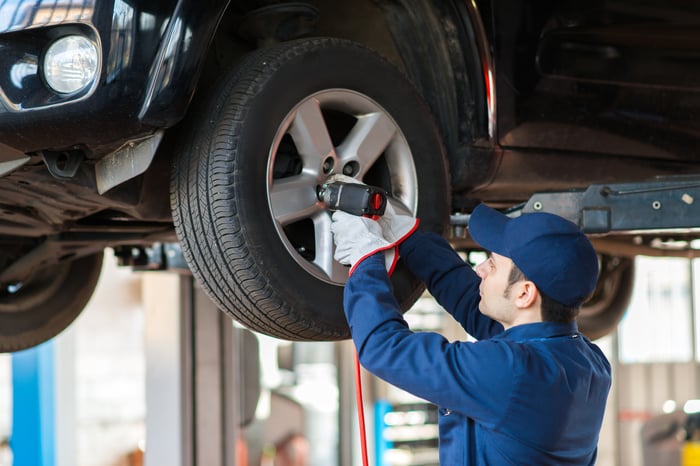 Starting from the top: AutoZone's net sales checked in at $2.47 billion, which was just shy of consensus estimates from analysts polled by Thomson Reuters who expected $2.49 billion, but was still a 3% gain over the prior year. Same-store sales checked in with a modest 1.6% gain over the prior year. First-quarter gross margins expanded by 23 basis points to reach 52.7%. Operating profit increased 5% to $459 million, with margins moving a similar 24 basis points higher to 18.6%.

That all culminated in a first-quarter net income of $278 million, an 8% increase over the prior year. Diluted earnings per share were $9.36, ahead of analysts' expectations by a nickel and 13% higher than last year's $8.29 per share, thanks in part to aggressive share buybacks.

The results were encouraging enough for J.P. Morgan analyst Christopher Horvers and his team to move their target price from $808 up to $910. Horvers noted: "Looking to 2017, we continue to favor names that could see accelerating sales trends even without changes in tax policy (particularly after the market move) and AZO is one of only a handful of names in our coverage in that regard..."

What AutoZone continues to do well

Longtime AutoZone investors will tell you that one of the things management does consistently and aggressively is repurchasing shares. During the first-quarter AutoZone repurchased $363 million of its common stock and only has about $783 million left under its current repurchase authorization, so investors can look forward to an update on that this fiscal year. Take a look at the graph below and admire how much the shares outstanding have declined: 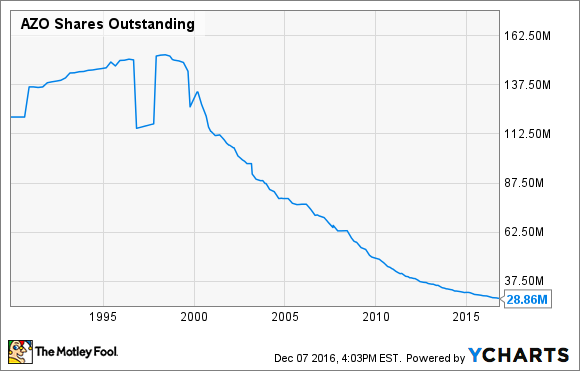 Another focus of management has been to improve return on invested capital (ROIC), and while it's declined slightly from its peak, it still hovers near all-time highs. AutoZone has been cautious with its new strategies, such as its mega hub stores and more frequent inventory replenishment, and that combined with surging net income sets the stage for stable ROIC going forward. 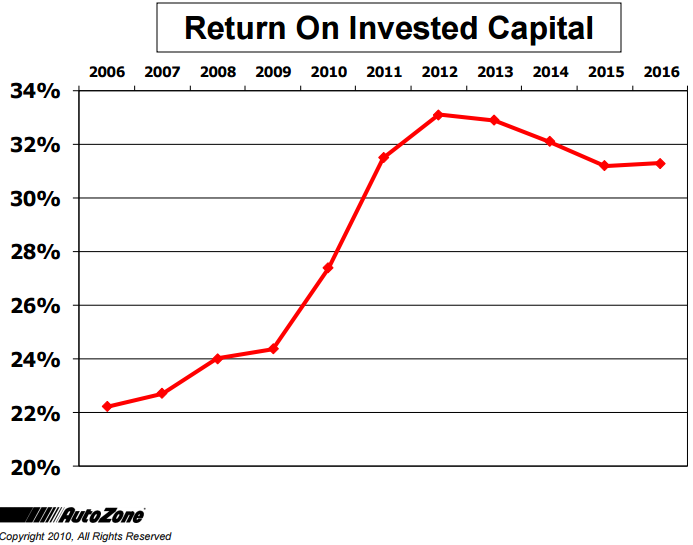 AutoZone is mostly known for being a do-it-yourself (DIY) retailer, where consumers go to get necessary automotive parts to fix or repair their vehicles. The DIY auto aftermarket industry is estimated to be worth about $54 billion per year, and AutoZone ranks No. 1 in market share. But as vehicles become more complex and difficult for consumers to fix on their own without professional help, AutoZone's increasingly focusing on growing its commercial do-it-for-me (DIFM) side of the business. The DIFM market is estimated to be worth $67 billion annually, and AutoZone only owns about 3% market share.

During the first quarter, AutoZone generated nearly $2.47 billion in sales from its auto-parts stores, domestic and abroad, but its DIFM business only accounted for $460 million of that total; if that's a 50-50 split in the future, it'll be a huge win for investors. Not only does management believe there's still room to add more stores, but as AutoZone increasingly becomes known for DIFM sales and repairs, it should continue to increase its top and bottom lines at a decent clip, all while aggressively repurchasing shares to drive earnings per share higher. As retailers go, AutoZone remains a solid option for investors.