Taiwan Semiconductor Manufacturing Company (NYSE:TSM) scored a major win in 2014 when Apple (NASDAQ:AAPL) began relying exclusively on the chip giant for the manufacture of its A8 and A8X applications processors. TSMC suffered a bit of a setback vis-a-vis Apple when it wound up splitting the A9 chip manufacturing contract with Samsung (NASDAQOTH: SSNLF), though the company is believed to have secured all the orders for the A10 chip that powers this year's iPhone 7 and iPhone 7 Plus.

Revenue from Apple represents a significant portion of TSMC's business, so the chipmaker is likely very motivated to develop and release compelling new manufacturing technologies at a rapid clip to keep Apple's business.

Apple's upcoming A11 is expected to be manufactured in TSMC's 10-nanometer chip manufacturing technology, and the company's statements strongly suggest that it will be using TSMC's follow-on 7-nanometer technology to build the A12.

TSMC recently detailed that 7-nanometer tech. Let's take a closer look at it to understand what kinds of performance and power enhancements Apple can potentially bring to the A12.

Honey, I shrunk the chip!

What Apple has tended to do is keep its chip sizes roughly flat generation over generation, using the increased density to cram more functionality and features into a given area. 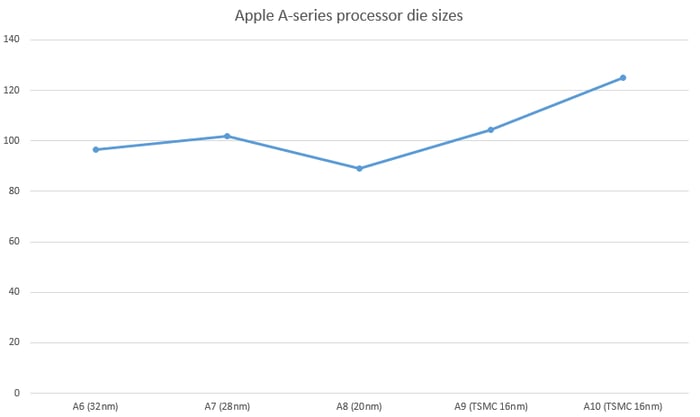 Apple was forced to use manufacturing technologies that offered roughly the same density for three generations (TSMC's 16-nanometer technology didn't offer a significant area reduction over its 20-nanometer technology; it was primarily a performance improvement), which led to some die size growth over the last three years.

Since the 7-nanometer technology gives a huge area reduction over the 16-nanometer technology, Apple can could conceivably pack in more than three times the "stuff" that the A9 chip had while still achieving a die size of approximately 100 square millimeters.

What "stuff" could Apple put in?

Apple would also have more real estate to bulk up the sizes of the other key functional blocks on the chip (i.e., image signal processor, CPU, memory controller) to improve performance.

Beyond the area shrink 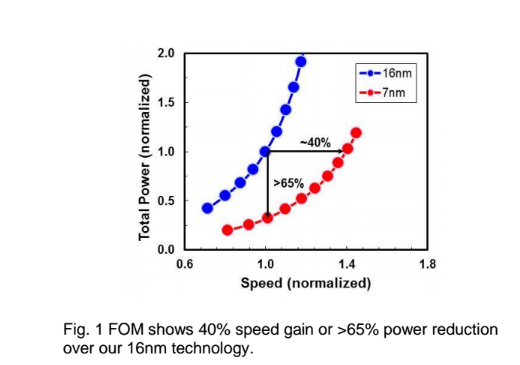 Apple's A10 has two "high-performance" processor cores and two "high-efficiency" cores and the chip can switch between them based on the workload that the chip is required to run.

I suspect that Apple will take full advantage of the two "extremes" outlined here. The high-performance cores could get a 40% boost in frequency relative to what was possible on the A10, while the high-efficiency cores could see a significant power reduction while keeping performance flat to slightly up.

The future looks bright for Apple's A series

Although Apple's A10 chip is blazing fast today, advancements in chip manufacturing technology coupled with architectural innovations should allow Apple to make the A10 look "slow" within a couple of years.

Of course, app developers and Apple itself will have to find ways to take full advantage of all that computing power (it's unlikely that the A10 is being used to its full potential in most apps today), but at least the hardware will be there.