When a public company generates a profit, it essentially has three things that it can do with that money:

In most cases, the first option is the one that makes the most sense. Very few companies don't have opportunities to invest in growing the business, whether it's developing new products, geographical expansion, or making an acquisition, putting profits back to work in ways to make even more profits is almost always the best thing to do, while paying out any leftover cash in dividends.

But in some cases -- particularly with large, well-established companies that generate very large, regular cash flows, it might also be a smart use of cash to repurchase shares. And it's pretty clear that the management of energy giant Phillips 66 (NYSE:PSX) thinks share buybacks are a good thing. Through the first three quarters of 2016, the company has spent $812 million to repurchase 10.1 million shares of stock.

An aggressive buyer of shares since going public

Since being spun out of its former parent company, ConocoPhillips (NYSE:COP), in 2012, Phillips 66 management has been an aggressive, regular buyer of its own stock. Since the inception of its share-buyback program in 2012, the company has repurchased 102.6 million shares of stock at a $7.2 billion cost. When we include a deal with (now largest shareholder) Berkshire Hathaway (NYSE:BRK-B) to exchange $1 billion in shares for part of its chemical business, and that's a 17% reduction in shares outstanding: 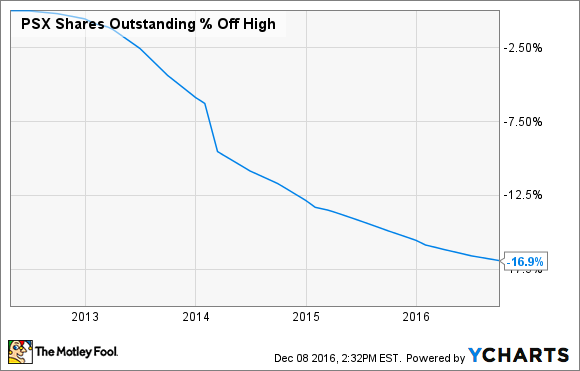 That works out to an average of $70.18 per share the company has paid, about a 20% discount to recent share prices.

A closer look at what Phillips 66 does with its cash

Phillips 66 certainly qualifies as a company with very large, consistent cash flows. Its primary businesses are oil refining and marketing of refined products, midstream oil and gas operations, and petrochemical manufacturing. These segments all have significant and fairly stable industrial and commercial demand, allowing Phillips 66 and its subsidiaries to produce a large amount of cash from operations: 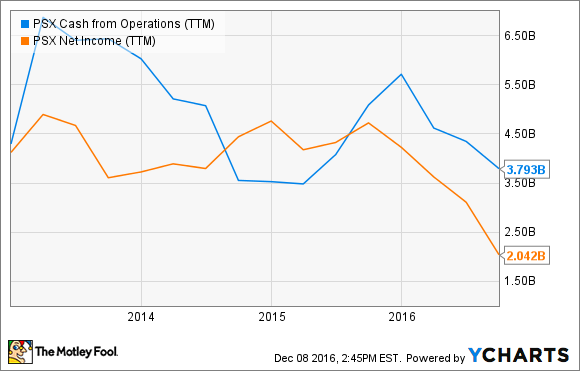 And the company uses that cash for all three of the things noted at the top of this article. So far in 2016, Phillips 66 has paid $954 million in dividends, the aforementioned $812 million in share buybacks, and $2 billion on capital expenditures. So that's $3.8 billion spent, while the company has generated only $1.39 billion in net income, and $2.3 billion in operating cash flows.

So far in 2016, Phillips 66 has spent more money than it has made. That was also the case in both 2015 and 2014, with the company using about $2.3 billion more in cash than it generated, while also taking on nearly $3 billion in additional debt over that time.

Bottom line: Phillips 66 has historically spent more on capex, dividends, and share buybacks than it generates in profits or cash flows: 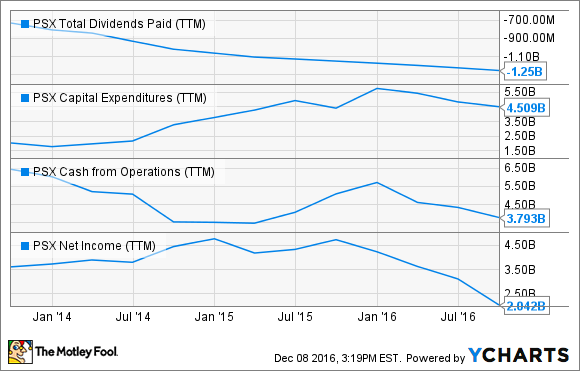 On balance, these share buybacks should make you happy -- with this caveat

There's no getting around the reality that Phillips 66's use of debt has allowed it to simultaneously invest in growing its midstream business, pay (and increase) a nice dividend, and aggressively repurchase shares, so it's not worth arguing whether the debt is technically funding capital growth, or propping up the dividend and share-repurchase program.

What really matters is whether management is pulling the right levers to generate a solid return on that spending. If the capital projects generate a better return than the cost of the capital, then the debt is worth it. And considering that Phillips 66 pays only about 3.5% on its long-term debt, the bar is relatively low to generate incremental per-share earnings growth from those investments.

When it comes to buybacks, the biggest measure of success is this: Did the company buy them back at a discount? So far in 2016, Phillips 66 has averaged $80.39 per share on the 10.1 million shares it has repurchased. That's about 8% below recent prices and should prove to be good value over time.

The caveat: The true "win or lose" result of these buybacks won't be apparent until we can measure the gains from the company's growth investments. If those capital projects don't deliver earnings growth that more than covers the cost of the debt associated with them, then the company would have been better off avoiding the debt and not repurchasing the stock, even factoring in the discount paid. Historically, Phillips 66 management has done an excellent job with capital allocation, but only time will tell if that remains the case.

Phillips 66 Has Bought Back 10 Million Shares So Far in 2016. Should Investors Be Happy? @themotleyfool #stocks $PSX $BRK-B $COP Next Article
Current