After reporting disappointing third-quarter results, shares of Duluth Holdings (NASDAQ:DLTH), a niche apparel maker that caters to tradesmen in rural areas, fell by more than 22% as of 11:30 a.m. EST on Friday.

Here's a quick look at the quarterly highlights:

Management blamed the revenue shortfall on "unseasonable weather, coupled with a highly promotional environment." In response, it lowered guidance for fiscal 2016.

Here's an updated look what it expects to happen during the full year:

Given the disappointing third-quarter sales and cut to full-year guidance, it's no surprise to see shares cratering today.

Duluth's long-term shareholders have enjoyed a fantastic run in 2016. Even after including today's huge drop, shares are still up more than 96% since the start of the year. That blows past the returns of the retail sector in general as measured by the SPDR S&P Retail ETF (NYSEMKT:XRT). 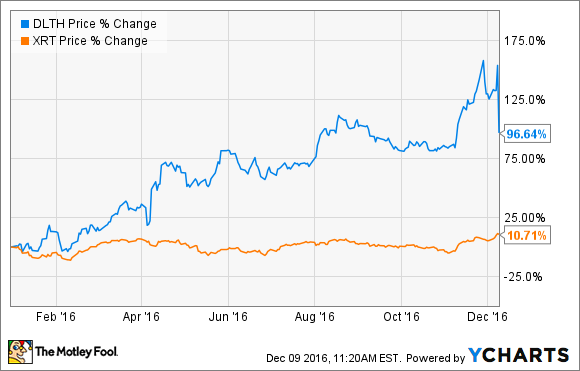 While Duluth's third-quarter results were a bit light of expectations, the company continues to feel good about its long-term prospects. In the release, management reaffirmed its long-term financial growth targets, which call for roughly 20% annual sales growth and 25% net income growth.

With plenty of room left for new store openings and rising gross margins, these long-term targets appear to be achievable. If true, then it wouldn't surprise me one bit to see shares continue to provide investors with market-beating returns.