Shares of Advanced Micro Devices (NASDAQ:AMD) rose 23.2% in November, according to data provided by S&P Global Market Intelligence. The big news during the month was an announcement from Alphabet's Google that it was installing both AMD and NVIDIA (NASDAQ:NVDA) GPUs in its cloud data centers.

NVIDIA's data center business is now at an annual run rate of nearly $1 billion, while AMD doesn't break out data center revenue. The opportunity for AMD is immense if the company can continue to win cloud computing deals. An analyst last month estimated that artificial intelligence offers a $15 billion opportunity for semiconductor companies. Even grabbing a fraction of that total would be a boon for AMD.

AMD stock has been on a tear this year, driven by growing optimism that the company is finally on the verge of turning things around. The launch of its mainstream Polaris graphics cards earlier this year has produced revenue growth in its core computing and graphics business, but the company remains unprofitable. Next year, AMD will launch new Zen CPUs and Vega high-end GPUs, both of which will need to be successful for the company to grow into its valuation. 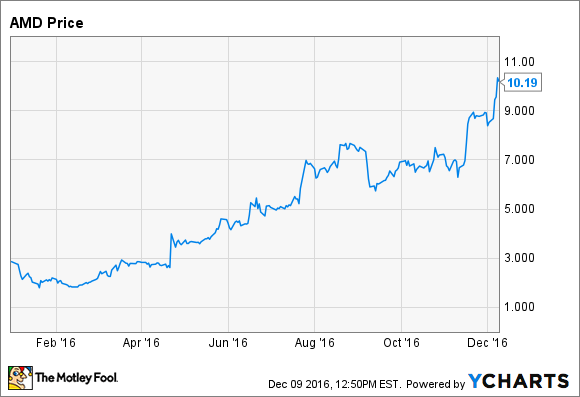 More good news in December has pushed shares of AMD even higher. A rumor emerged on Dec. 6 that AMD and Intel had signed a licensing agreement that would put AMD's GPU technology into Intel's CPUs. There's been no confirmation of any deal at this point, but it's possible that this deal will replace a cross-licensing agreement between Intel and NVIDIA that expires early next year. If that's the case, AMD could see annual payments from Intel. However, AMD graphics showing up in Intel CPUs seems unlikely.

2017 will be a big year for AMD, with the ultimate success of its turnaround set to be determined by the launch of new products. The Google deal in November was a positive, but the company remains far behind NVIDIA.