Over the past year, the market has been pretty clear with its valuation of many companies within the automotive industry: We aren't buying into a plateauing growth story. Yet at a time when many automakers have been posting record profits at the drop of a hat, investors pushed their price-to-earnings ratios unusually low. 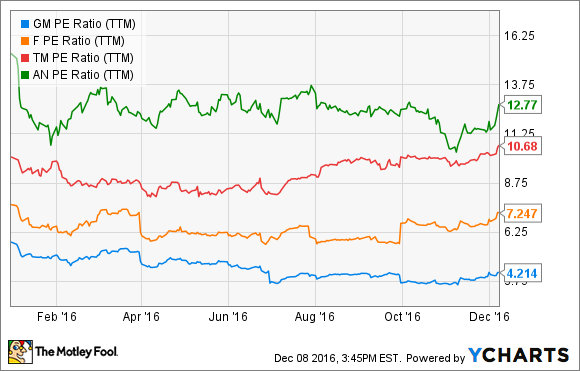 Despite Wall Street saying no thanks, there are a few developments that could salvage the growth stories of global automakers such as Ford Motor Company (NYSE:F), General Motors (NYSE:GM), and Toyota Motors (NYSE:TM), and even dealership groups such as AutoNation (NYSE:AN).

Those possibilities include emerging markets surging, smart mobility projects ramping up, and autonomous vehicles changing the way the world moves and how automotive companies generate revenue. There could also simply be small trend changes that help companies take more of each dollar to the bank.

Looking at one example of the latter, Edmunds.com recently posted a report that showed an encouraging trend.

You've probably heard this before, but in case you haven't: There's an old rule of thumb that says luxury sales account for about 10% of industry sales but generate nearly a third of industry profits. Investors have reason to hope that China's luxury vehicle market will boom in the future as its mass-market vehicles have in recent years, and that means that luxury SUV sales -- which carry higher margins than luxury passenger cars -- will add more market share, if they follow in the steps of their mainstream counterparts.

According to data tracked by Edmunds.com, that appears to be the case. Here's a look at how luxury SUVs vs. luxury cars have trended, and which brands are ahead of the curve in offering more luxury SUV sales. 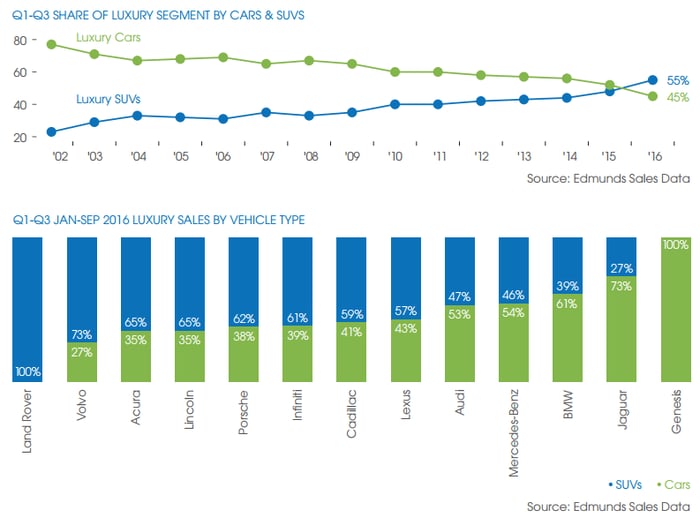 Ford's luxury Lincoln lineup has done a great job of jumping on the luxury SUV trend. First, it introduced the all-new MKC in 2015, built on the same platform as the Escape; the vehicle now accounts for nearly one-fourth of Lincoln sales. Then Ford unleashed the redesigned MKX, a larger SUV than the MKC; its sales jumped 42% this year and it is a mere 445 units from being the brand's best-selling vehicle, behind the MKZ sedan.

"In a market where three players comprise nearly half of all sales, it has been hard for some of the lower volume luxury players to gain traction," Edmunds reports. "SUVs have changed that and many smaller automakers have used all new SUV debuts to catapult their sales, gain more shoppers, and refresh their image."

Thanks to the surge in Lincoln's SUV sales, for example, it's on pace to record roughly 110,000 vehicle sales in 2016, a feat the brand hasn't managed since 2007. It would also be its third consecutive year of increases. The company hasn't had a stretch like that since at least 1998 -- which is as far back as my data goes.

Now, this trend is definitely noteworthy, and for the sake of automakers' margins, I hope it will continue. But it's more of an example of how investors are going to have to dig into trends and information to better understand where the industry's health is heading, because new-vehicle sales are plateauing and a rising tide won't be lifting all boats any longer. The growth story for major automakers and other auto companies, if it materializes, will be coming from a multitude of potential angles, such as accelerating luxury SUV sales.