Ambarella (NASDAQ:AMBA) showed year-over-year business growth for the first time after a prolonged slide that started last year. Despite the positive quarterly results, though, the stock took a hit thanks to an outlook that disappointed investors. If you are a shareholder, here are the details worth considering.

A repeat of recent history

For those who follow Ambarella, it's deja vu. The stock has gyrated wildly on earnings reports and outlooks in the last two years. Last summer, a slowdown in sales gave way to a full-blown contraction when sales of wearable cameras dropped. The company's over-reliance on GoPro (NASDAQ:GPRO) and other wearable cameras led to the drop, but as the company has worked its way into other markets, business has made a rebound.

Shares rebounded sharply through the fall on improving optimism, and the third quarter was the company's best ever for total sales. Revenue was $100.5 million, an 8% increase over last year, and the first year-over-year increase since 2015. 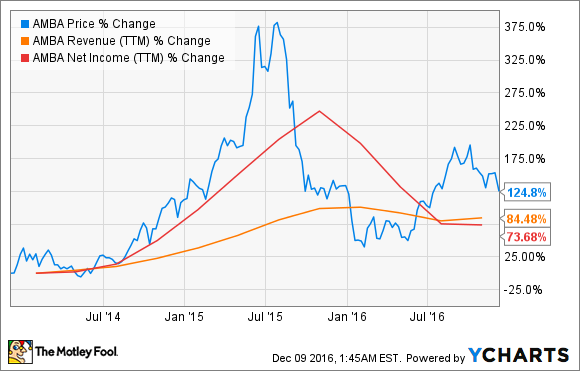 However, profit was down a little over 1% as research and development, selling costs, and other expenses increased more than revenue did. Also weighing on share prices was a tempered outlook for the fourth quarter of the year. Ambarella expects anywhere from a 24% to 28% increase compared with the fourth quarter of 2015, but investors were hoping for more since sales last winter were very poor.

Adding to the feelings of negativity were comments that the early part of 2018 could see sales slide once again. Management admitted it's too early to tell, and much will depend on the strength of the current holiday shopping season, but the outlook has led to yet another steep drop in share prices.

Based on management's comments, it looks like Ambarella may run into another soft patch, or the long-running soft patch that started last year is persisting. However you wish to look at it, though, there were some positive points worth focusing on instead.

One is that the company has made great strides in reducing its dependence on wearable cameras. During the earnings call, management reviewed a number of positive developments in drones, security cameras, and automotive video and cameras. Ambarella does break out specific numbers for each division of business, but that increased R&D spending mentioned earlier is from ongoing efforts to expand opportunities.

Another positive was that the wearable camera market is shaping up to have a solid holiday sales performance. GoPro is especially having a positive impact on Ambarella, reporting strong initial sales from its new HERO 5 camera. Sales were up 35% year over year the week of Black Friday.

Although Ambarella is working to decrease its dependence on the camera market, the company and investors will certainly take a rebound in sales there.

Focusing on the long term

By now, investors in the high-definition video chip maker should not be surprised by the volatility of the stock. The company has hit a few soft patches and will no doubt hit more from time to time as its end-customers' sales ebb and flow.

Nonetheless, Ambarella has proven it isn't a one-hit-wonder. It survived last year's sharp drop in camera sales and has found new buyers for its specialized video processing technology. It can be easy to get caught up in the short term, especially with the stock taking another beating, but the longer-term trend is still looking up.