Hundreds of millions of American children grew up on Hershey (NYSE:HSY) candy bars, and the company behind the iconic chocolate bar has built and maintained its empire for decades. Along the way, Hershey has provided tasty long-term returns to its shareholders, including the huge controlling interest that major shareholder Hershey Trust Company has held throughout much of the chocolate company's history. Below, we'll look at how Hershey's stock has performed and what lies ahead for the candymaker. 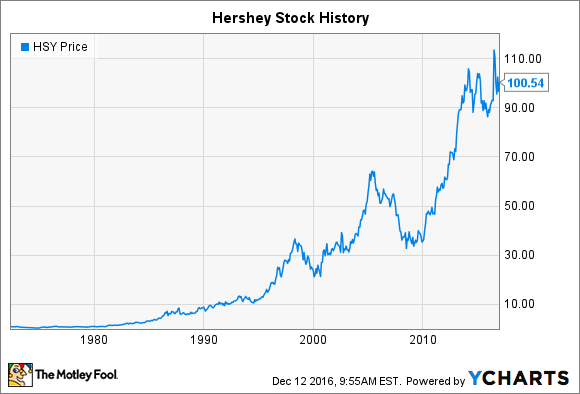 Hershey has generated impressive long-term returns for those who own its stock. Over the past 35 years, the company has produced average annual returns in excess of 15%. But as the chart above shows, those gains didn't come without volatility along the way.

In general, the trajectory of Hershey's stock follows what many consumer giants have seen over the same period. Steady growth throughout the 1980s and 1990s produced sizable gains, but when the internet tech boom of the late 1990s emerged, many investors shied away from traditional old-school companies like Hershey in favor of red-hot technology stocks. That trend largely reversed itself during the bear market of 2000 to 2002, and Hershey performed quite well in comparison to broader market measures like the S&P 500 as investors remembered the dependability of Hershey's sales and profitability.

Similarly, the housing bust, the 2008 recession, and the financial crisis that ensued sent Hershey stock downward temporarily. Since then, however, the economy has recovered, and Hershey has climbed to new all-time highs as a result.

A history of blocking deals

Yet what many people think of most when considering Hershey is its history of being an elusive takeover target. Because of the majority control that the Hershey Trust Company wields, it would have to approve any buyout. Thus far, it has not done so, despite several past offers.

In 2002, gum giant Wrigley sought to make a bid for the chocolate giant. Many investors believed that the deal would give the Hershey Trust a viable exit strategy for its hugely concentrated position in Hershey stock. Yet concerns among the residents of Hershey, Pa., as well as those who had attended the trust supported Milton Hershey School, created enough controversy to lead the trust's board to turn down Wrigley's offer. The trust also rejected a bid from Swiss peer Nestle at the time as well.

Then, in 2007, news surfaced that executives at Hershey had been talking with counterparts at British confectioner Cadbury about a possible merger. When the trust found out about the discussions, accusations flew, and the episode led to the eventual departure of then-CEO Richard Lenny and a substantial number of corporate directors. The trust later had somewhat of a change of heart and invited further discussion with Cadbury, but the moment had passed as the financial crisis loomed.

Most recently, Mondelez (NASDAQ:MDLZ) approached the chocolate maker with an offer in June. The company rejected the Mondelez bid of $107 per share in cash quickly, and after a couple of months of considering whether a higher bid might meet with greater success, Mondelez said in late August that it would move on and instead look for ways to compete more effectively against Hershey.

What's next for Hershey?

With hopes for a takeover firmly quashed, Hershey will have to keep finding ways to keep producing the long-term growth that it has given shareholders over the decades. Investors are fairly optimistic about its near-term prospects, but projected bottom-line growth of just 7% to 8% next year makes a current valuation of almost 22 times forward earnings look expensive. The company has been generous with dividends, but with its recent share-price jump, the current yield of less than 2.5% isn't as sweet as it has been in the past.

Hershey stock has plenty of potential for future long-term growth, especially since its business model remains largely as attractive now as it has since it started producing chocolate more than a century ago. It might take some time, however, for Hershey shares to settle down after another failed episode in the company's long M&A history.

Hershey Stock History: How the Chocolate Giant Has Been Sweet to Shareholders @themotleyfool #stocks $HSY $MDLZ Next Article
Current