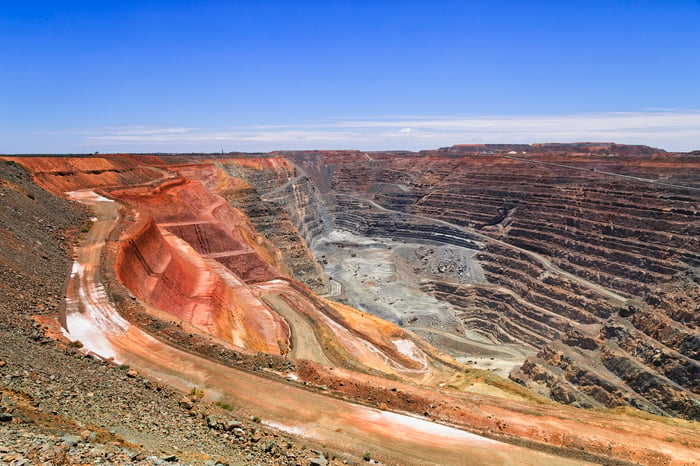 Exchange-traded funds have gotten increasingly popular over time, and the top ETFs of 2016 took advantage of favorable trends that sent their share prices soaring. With thousands of ETFs available to investors, many similar funds cover the same general parts of the market and therefore had similar returns. Below, we'll highlight three major themes that were extremely successful in pushing five top-performing ETFs higher in 2016:

A big bounce for commodities

The best-performing ETFs in 2016 capitalized on the huge rebound in the commodities markets. After getting punished in 2015, a wide variety of commodities posted big gains this year. Oil got the lion's share of headlines throughout the year, but precious metals like gold and silver bounced off their worst levels. Also, base metals like copper started to benefit from the turnaround in global industrial activity, which has many market participants looking for better times ahead.

A host of leveraged ETFs had slightly better gains, but the standout in this space was the traditional and popular SPDR S&P Metals and Mining ETF. Used by many professionals as a proxy for the mining industry, this SPDR ETF is up more than 120% in 2016. The ETF especially benefited from its position in steel stocks, but exposure to iron ore, copper, coal, and platinum-group metals also contributed to its strong performance: 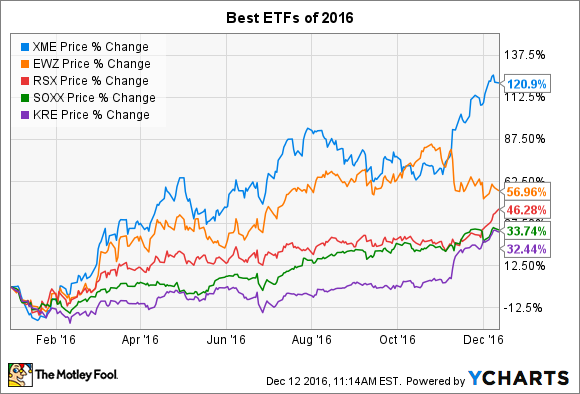 Emerging markets get back in the game

Emerging-market stocks entered 2016 on somewhat of a losing streak, having largely missed out on the gains in U.S. stocks during the long bull market. Toward the end of 2015, emerging markets fell sharply on concerns about an anticipated quick rise in U.S. interest rates and the potential impact on investors' willingness to remain invested internationally. Yet interest-rate increases didn't come as quickly as most had anticipated, and the dollar's strength started to let up a bit.

In particular, ETFs for emerging markets exposed to currency markets did quite well. The iShares MSCI Brazil ETF was up about 57% in 2016, while the Market Vectors Russia ETF posted a 46% increase. If prices of oil and mined products remain in an uptrend, then these two heavily resource-based economies could stand to gain even more ground in 2017.

Finally, investors who correctly identified some industry groups within the domestic economy were able to score strong returns without having to resort to leverage. Specifically, the semiconductor space was quite strong, and regional banks also benefited from more favorable conditions toward the end of the year.

The iShares PHLX Semiconductor ETF climbed by more than a third this year, riding the strength of some of the best-known names in the technology industry. The graphics-chip market was especially hot during 2016, causing industry leader NVIDIA to nearly triple and sending rival Advanced Micro Devices up by more than 260%. Good results from leading players in the mobile and memory-chip markets also contributed to the ETFs' dramatic gains.

Meanwhile, the SPDR KBW Regional Banking ETF was up more than 32%. Regional banks, flat for most of the year, soared following the U.S. presidential election, benefiting from the sharp rise in long-term interest rates that accompanied the election results. Stocks like Zions Bancorp and Regions Financial were some of the top performers among the ETF's biggest holdings, but performance across the stocks in the ETF's portfolio was fairly consistent across the board. Looking ahead, investors believe that regional banks can benefit from a steeper yield curve, lending at higher rates while continuing to pay rock-bottom returns for savings-account and time-deposit customers. Investors will want to watch closely to see what happens with short-term interest rates in 2017, and whether that has a positive or negative impact on interest margin.

These general categories of ETFs weren't the only ones to produce strong returns in 2016, but they explain how most of the top ETFs of 2016 earned their places on the list. The same trends that created these good results in 2016 might well last into 2017, so it's worth taking a closer look at these winning ETFs now.