The cold winter months aren't slowing down the torrid pace of dividend raises lately. Many companies are putting a bow on 2016 by lifting their shareholder payouts, and some of those hikes have come from high-profile enterprises. Case in point, this trio of well-known and widely held stock market mainstays.

"The Mouse" is handing out a little more cheese. Walt Disney (NYSE:DIS)has declared a nearly 9% increase in its semi-annual payout to $0.78 per share.

In the press release announcing the move, Disney pointed out that fiscal 2016 was the sixth year in a row it's posted record revenue, bottom line, and per-share net profit. Drilling down a little more, top line for the period rose by 6% to $55.6 billion, while attributable net advanced by 12% to almost $9.4 billion. That shakes out to a very healthy 17% net profit margin.

This, despite the worrying fact that ESPN, the key asset in its media networks division -- essentially, the company's TV assets -- continues to struggle with cable subscriber erosion. The company has several ways to help rectify this (deals with streaming services, for one), but these might take some time to kick in.

That concern aside, Disney's firing on all cylinders. The studio entertainment (i.e., film) division did particularly well, delivering top-line growth of nearly 30% for the year. That helped the company boost its free cash flow by a sturdy 27%, to over $8.4 billion. That easily covers the dividend payout, even at the enhanced rate. We can look forward to more distribution hikes from the entertainment giant. 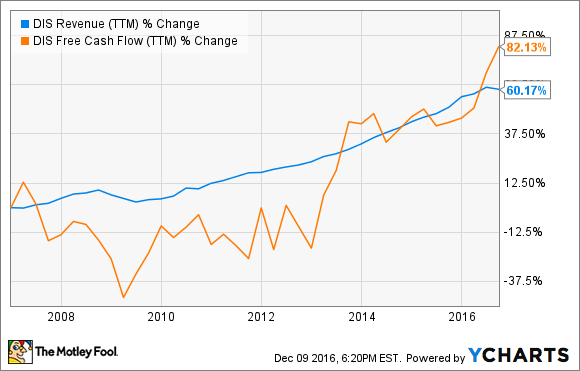 Disney's fattened dividend will be handed out on Jan. 11 to stockholders of record as of Dec. 12. At the current share price, it would yield 1.5%. That's below the present average of dividend-paying stocks on the S&P 500, which stands at just under 2%.

Recent weeks have seen a flurry of dividend aristocrats maintaining their status by hiking their payouts (the aristocrats are a tiny group of stocks that have done so at least once annually for a minimum of 25 years running). One of the latest members to take the plunge is spice maker McCormick (NYSE:MKC), with a 9% raise in its quarterly dividend, to $0.47 per share.

It won't have to scramble to fund this raise. Fueled by smart acquisitions and guided by a sharp management team, in Q3 the company grew its adjusted net profit by 20% on a year-over-year basis. This landed at just over $131 million, well exceeding analyst expectations. Meanwhile, sales crept up by 3% (6% on a constant currency basis) to $662 million.

That led McCormick to lift its expectations for per-share earnings in fiscal 2016. Adjusted EPS should be $3.75 to $3.79, a considerable shift northwards from the $3.68 to $3.75 it previously estimated.

We can expect a similar development in the company's cash flow, which has shown steady and sure improvement over the years. In fiscal 2015 McCormick's free cash flow was more than double what it paid out in dividends, so it has plenty in the tank for this and future raises. The company is a good bet to maintain its aristocratic status for at least a few years yet. 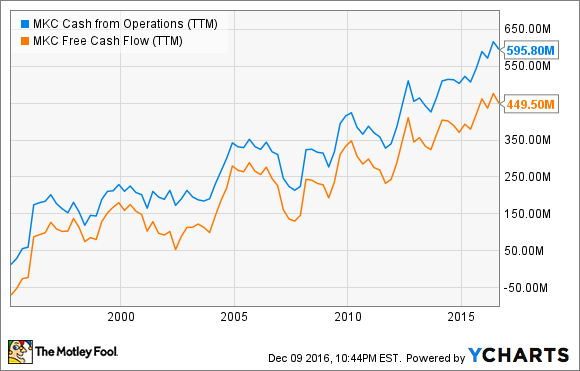 McCormick will pay its upcoming dividend on Jan. 17 to shareholders of record as of Dec. 30. It would yield 1.8% on the most recent closing stock price.

McCormick isn't the only dividend aristocrat making a move recently. Steelmaker Nucor (NYSE:NUE) has also padded its payout, bumping its quarterly dividend by 0.6% to just under $0.38 per share, for its 44th annual increase in a row.

Such a modest lift probably won't juice the stock price much, but Nucor doesn't need a boost at the moment. The stock has been on a tear since the presidential election, in what's widely seen as a "Trump rally" (among other factors, many are expecting the president-elect to protect the steel industry through measures such as raising import tariffs higher).

In terms of fundamentals, the company's prospects have improved a bit on the recent rise in selling prices for steel. In its most recently reported quarter, total production, shipments, and sales all inched up slightly on a year-over-year basis, with the latter coming in at almost $4.3 billion. Net income, meanwhile, rose 10% to over $294 million.

A look at Nucor's operating and free cash flow reveals some cause for concern; both were down in the neighborhood of 50% from the same period last year. The company can still easily cover its dividend, even at the reduced amounts, but this development is worth keeping an eye on going forward.

Nucor's new distribution is to be paid on Feb. 10 to investors of record as of Dec. 30. At the most recent closing share price, it would yield 1.4%.