This past week, leading global coal producers Glencore and Teck Resources (NYSE:TECK) captured a remarkable price for a portion of their coal output for the first quarter of next year. The producers agreed with Japan's biggest steelmaker on a price of $285 per ton, which is 43% higher than the current quarter's benchmark price and the highest price for coking coal since 2011. Unfortunately, this massive rally in the coal market will elude coal company Alliance Holdings GP (NASDAQ: AHGP) and its coal-producing MLP Alliance Resource Partners (NASDAQ:ARLP). Here's why the global coal rally is leaving these producers in the dust.

Not all coal is created equal

What's noteworthy about the Teck Resources deal is that it is for coking coal, also known as steelmaking coal or metallurgical coal, which is a higher-grade coal used to transform iron into steel. It's a different type of coal than what's used to generate electricity, which is commonly known as thermal coal. Thermal coal is more abundant, especially in the U.S., and cheaper to produce than coking coal, which is why it's such a common fuel in electric generation.

Thermal coal is the primary commodity produced by Alliance Holdings GP's MLP Alliance Resource Partners. In fact, more than 90% of its coal goes to utilities in the U.S. that use it to generate electric. Because of that, Alliance relies on domestic thermal coal pricing, which is an entirely different coal market.

Despite the rhetoric, American coal is not doing much these days

In fact, while global seaborne coking coal prices have risen sharply in recent weeks, domestic thermal coal prices in the regions where Alliance Resource Partners produces have been rather tame: 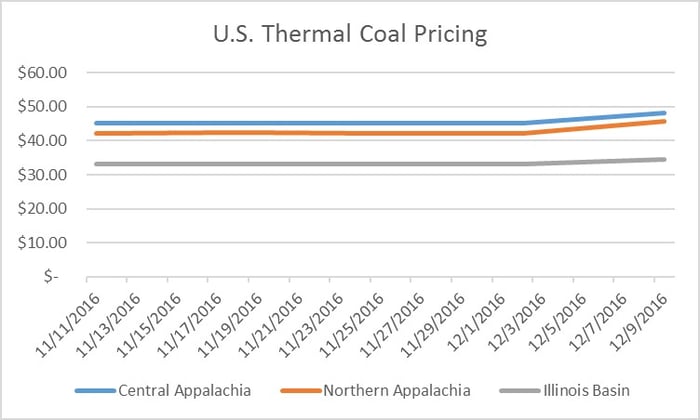 Not only that, but those spot market coal prices are lower than Alliance Resource Partners' realized coal prices this year: 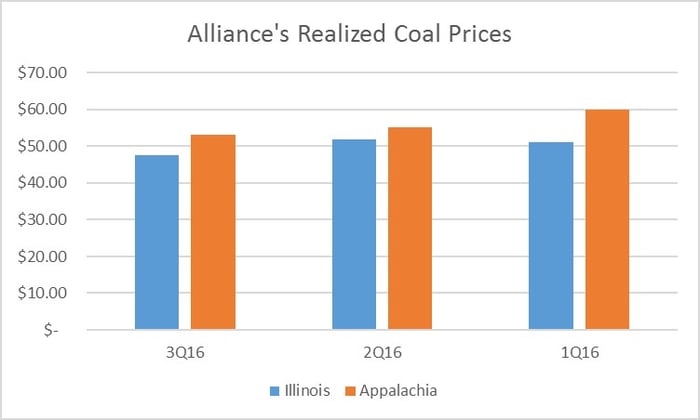 The muted reaction of domestic thermal coal prices since Donald Trump was elected president is noteworthy considering his campaign promises to end the war on coal. That said, the market knows that while he intends to take actions to repeal regulations that have hurt coal producers in recent years, that will not necessarily spur demand for more coal in the country, especially considering all of the planned coal-fired power plant retirements on the horizon.

That said, Alliance Holding GP does not rely on the coal spot market to sell its coal. Instead, the company signs long-term contracts with utilities to supply them directly with coal. Those contracts set firm volume and price commitments, which helps limit the company's downside in a falling price environment, such as the one that tormented the coal market over the past several years.

However, those coal contracts work both ways. As such, the company also doesn't benefit from higher prices because its contracts lock in coal prices. In other words, even if domestic coal prices rocketed higher, Alliance Holdings GP would not see much impact because it has already sold out the 2016 coal capacity of its MLP. While the company does have some coal in inventory that it can sell to capture rising prices, which it did last quarter, it does not have the flexibility to capture the full impact of rising prices like Teck Resources can.

That's not to say Alliance has no upside to rising prices in the future. The company does have about 20% of its 2017 capacity currently uncontracted, which provides some upside to higher prices next year. Further, the company has idled several mines over the past year to limit production by matching it with firm coal contracts. Alliance could bring this idled capacity back online to capture rising prices. While that would take some time, and would likely only happen if the company had enough firm contracts to justify the expenses needed to bring this capacity back online, it does provide some optionality.

While global seaborne coking coal prices have risen sharply in recent weeks, domestic thermal coal prices have not done all that much. That is an important distinction, because it means some coal producers are benefiting more than others from the rally. Meanwhile, even if domestic prices surged, Alliance Holdings GP and Alliance Resource Partners would not profit from that rally to the same degree because they sign the majority of their coal output to long-term contracts, which limits their downside as well as their upside. Needless to say, investors looking to profit from the coal price rally should look elsewhere.