Nick Woodman, the founder and CEO of GoPro (NASDAQ:GPRO), created a company that was valued at $11 billion in late 2014. GoPro stock has plummeted since then, driven down by both an outlandish valuation and a sales slump that has plunged the company into the red. GoPro has posted a net loss in each of the past four quarters, and it expects to lose money on a generally accepted accounting principles (GAAP) basis in 2017. The company is now valued at just $1.25 billion. 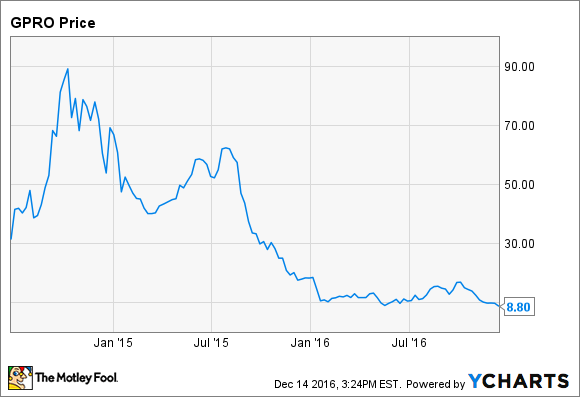 The initial idea -- to sell an action camera that could handle extreme conditions -- was a good one. GoPro was a first mover, and that gave the company an important advantage. But now, the company faces increased competition from both direct competitors and smartphones. The iPhone 7, while not completely waterproof, is water resistant, and it features a top-shelf camera that's likely good enough for most people. The market for action cameras is only so big, and GoPro seems to have run up against this reality.

Two of the company's attempts to branch out beyond action cameras offer compelling evidence that GoPro requires a new leader to navigate the next phase of its journey. The Karma drone disaster and the shuttering of GoPro's entertainment division are two signs that GoPro desperately needs new management.

GoPro first teased its Karma Drone in December of 2015. The product was supposed to be the company's high-profile entry into a new market, providing a growth opportunity beyond its core action camera business. Originally expected to launch in June, GoPro pushed the date back a few months. In GoPro's first-quarter earnings report, Woodman said, "And while we had to make the difficult decision to delay our drone, Karma, the upside is that Karma's launch should now benefit from the holidays."

Karma finally launched on Oct. 23, but disaster very quickly struck. On Nov. 8, GoPro recalled all 2,500 Karma drones that had been sold due to the device losing power during operation. A full refund was offered without the option of a replacement unit. GoPro plans to resume shipments once the issue is resolved, but as of Dec. 14, the company's website shows Karma as "temporarily unavailable." So much for a holiday sales boost.

After nearly a year of anticipation and months of delay, GoPro bungled one of the most important product launches in its history. The problem with the drone still hasn't been fixed, and it's unclear whether Karma will ever be back on shelves, or if anyone would want to buy one after this recall. The Karma disaster is reason enough for a management shake-up.

GoPro's business model ultimately revolves around selling hardware. That's why the company's big push into entertainment a few years ago never really made much sense. The company aimed to parlay its success selling cameras into a media empire, producing its own content and forming partnerships to make GoPro a destination for entertainment. Here's what SVP of media Zander Lurie told Fortune in late 2015:

We want to build an entertainment business to fit alongside the hardware and accessories business we built. In a perfect world, we build a robust streaming business that makes our (overall) business better."

It turns out that it's not a perfect world. It was never clear how any of GoPro's media ambitions would be monetized, so it's not all that surprising that the company is now shutting down its entertainment division. That news came with the announcement of a 15% workforce reduction, an attempt to cut costs in order to return to profitability.

GoPro's foray into media is a good example of what Peter Lynch called "diworsification" -- when a company tries to expand into areas outside of its core competency, often to disastrous results. Tony Bates, President of GoPro, will be stepping down at the end of the year, an announcement that coincided with the news of layoffs and the end of the entertainment business. But I think the company needs a bigger shake-up than that.

GoPro has struggled to turn its initial success into anything other than a string of failures. The best companies are eager to try new things, and failure is viewed as a learning experience. But when failure becomes the norm, a change in management is often necessary to turn things around.