It's shaping up to be a cold December across much of the U.S. -- and that's great news for department stores. 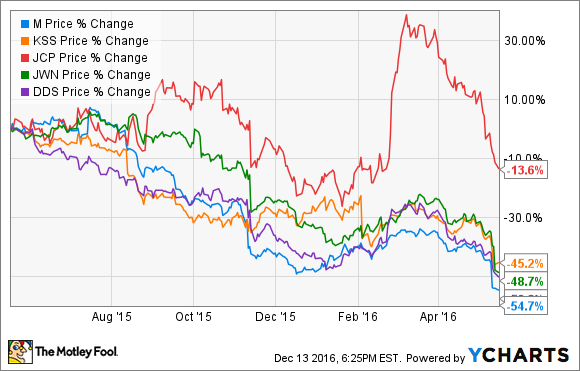 Some of this sell-off was justified, as department stores have lost ground to nimbler competitors. But some of it represented an overreaction to weather-inflicted sales and earnings declines. With bitterly cold weather sweeping across the country this month, department stores are poised for a strong rebound in sales and earnings in the fourth quarter.

During 2015, department stores delivered mixed results. J.C. Penney was a positive outlier, posting a 4.5% full-year increase in comp sales as it continued to regain customers following its failed strategy shift of 2012-2013. Nordstrom also performed well during the first half of the year, but sales slowed beginning in August. By Q4, Nordstrom's full-line comp sales were up just 0.2% year over year.

Meanwhile, Kohl's posted sluggish 0.7% comp sales growth for the full year. Still, that was better than the 2% and 2.5% full-year comp sales declines recorded at Dillard's and Macy's, respectively.

Despite easier comparisons, sales trends have gotten worse this year. Through the first three quarters of fiscal 2016, comp sales declined at a low-to-mid single-digit rate at Macy's, Kohl's, Nordstrom, and Dillard's. Even J.C. Penney only managed a 0.3% comp sales increase during that period.

Rising competition from e-commerce businesses like Amazon.com and off-price retailers such as TJX Companies clearly played a role in department stores' poor results in 2015 and the first three quarters of 2016. However, these companies were already formidable competitors in the years before that, and department stores were able to coexist with them then.

Thus, other factors have probably contributed to department stores' poor results. Chief among them is unfavorable weather.

Last year was the warmest winter on record in the U.S. Between December and February, average temperatures were about 5 degrees warmer than normal. This severely hurt sales of cold-weather apparel at department stores. Ultimately, they had to offer huge margin-killing clearance discounts to get rid of the excess merchandise at the end of the season.

After the weather was unseasonably warm between December and February, a six-week cold spell began in March -- just when department stores start selling spring merchandise. Because of this double-whammy, Q1 was the worst quarter of the past two years for department stores.

Department stores got walloped again by unfavorable weather last quarter. The U.S. experienced the warmest September on record, discouraging consumers from buying fall-weather merchandise. Cooler temperatures arrived too late in the quarter for retailers to make up for the weak September.

The weather is finally cooperating

In the past week or so, frigid temperatures have started to sweep across the U.S, with even more cold weather on the way. This is a welcome event for department store investors, as it should spark strong sales of winter apparel.

Two years ago, the U.S. had a cold and snowy winter, and it drove strong sales growth for nearly every department store chain. Macy's, Kohl's, J.C. Penney, Nordstrom, and Dillard's all reported comp sales growth of 2.5% to 4.5% that quarter.

Sales of cold-weather merchandise plunged by more than $200 million year over year at Macy's during the mild winter of 2015-2016. Even if the company recovers just half of that lost sales volume, it will have a big positive impact on revenue this quarter.

Furthermore, department stores entered this quarter with very lean inventories relative to a year earlier. As a result, pricing should be much stronger, driving profit margins higher across the industry.

Department stores' susceptibility to weather-related trends is a clear weakness compared to other retailers. But the weather does cooperate sometimes. The past year and a half was particularly tough from a weather standpoint. By contrast, investors may be surprised by the speed and strength of the recovery in department store earnings this quarter and in 2017.