For the second time in a little more than a month, a former market darling is ditching the co-CEO model in favor of a single chief executive. Last month, it was Whole Foods Market (NASDAQ:WFM); this time it's Chipotle Mexican Grill (NYSE:CMG).

Whole Foods will move back to having a single CEO next month. Image source: The Motley Fool.

Whole Foods and Chipotle are facing new challenges that have proven harder to surmount than originally expected. As a result, both companies are concentrating power in the hands of their founders in the hope that they will be able to revitalize the businesses they built from scratch.

John Mackey has led Whole Foods Market since co-founding the company more than three decades ago. But in 2010, he promoted longtime Whole Foods executive Walter Robb to be co-CEO, as Robb wanted to be a CEO but Mackey didn't want to retire.

Whole Foods prospered for a few years after that unorthodox move. However, over the past three years or so, virtually every grocery chain has expanded its offerings of organic and natural foods. This competition has stymied revenue growth for the grocery chain while also crimping its profit margin. As a result, Whole Foods shares have lost about half of their value since late 2013. 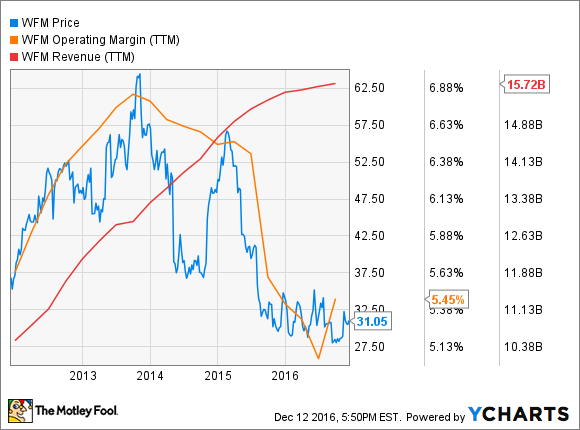 Whole Foods has reacted to rising competitive pressures by cutting prices and opening a new chain of smaller, value-focused stores, called 365 by Whole Foods. It is also looking to redesign the operating model of its namesake locations in order to drive down costs.

In this context, Whole Foods announced last month that Walter Robb will step down as co-CEO at year-end. Mackey will return to his prior role as sole CEO. This will give him more autonomy to shape the company's response to recent competitive challenges.

Chipotle Mexican Grill's leadership history is eerily similar to that of Whole Foods. Steve Ells has led the company since founding it in 1993. But in 2009, he promoted his longtime friend Monty Moran from the general counsel position to be co-CEO of the company. As co-CEO, Moran oversaw store operations and helped develop Chipotle's corporate culture.

However, like Whole Foods, Chipotle has fallen on hard times recently. Whereas a creeping increase in competition has gradually reduced Whole Foods' profit margin over the last three years, Chipotle's profitability simply collapsed in the past year.

Chipotle's customer base has shrunk in the past year. Image source: The Motley Fool.

Comparable sales have fallen more than 20% year over year for three consecutive quarters after a series of food safety lapses last fall. Meanwhile, Chipotle has had to spend more on advertising and promotions in order to try to win back customers.

Chipotle has thoroughly revamped its food safety procedures to prevent a repeat of last year's E. coli and norovirus outbreaks. However, sales haven't bounced back as quickly as expected. The food safety scares have put Chipotle in the spotlight, so that rumors about people getting sick at Chipotle now routinely go viral on social media. Additionally, throughput has slowed this year, due to employee turnover and a loss of focus on efficiency.

As a result, Moran stepped down last Friday as co-CEO of Chipotle, with Ells becoming the sole CEO again. The events of the past year have shown that the company needs a meaningful shake-up, and the board felt that this would work better with a single CEO.

On a conference call to discuss the changes, Ells said that having fewer layers of management will allow him to interact more directly with the store leadership teams. That's important because the centerpiece of his strategy involves simplifying everything that's done in the company's restaurants in order to improve customer service.

The co-CEO model has limited utility

When things were going well at Whole Foods and Chipotle Mexican Grill, it wasn't crazy to have two CEOs. At both companies, the co-CEOs were longtime friends, they worked well together, and there was a natural division of labor between them. Having co-CEOs may have helped the companies grow quickly.

However, when a company needs to reinvent itself, one voice is probably better than two. A single CEO is more likely to develop a coherent strategy. Furthermore, a streamlined hierarchy is more conducive to "testing and learning" with respect to major operational changes.

As founders of their respective companies, Mackey and Ells have the credibility to get buy-in from employees if they decide to implement big changes. Simply put, they are the right people to lead the businesses they founded through their current challenges.