But some stocks made these broad market returns look downright rosy by comparison. Investors in First Solar (NASDAQ:FSLR), TripAdvisor (NASDAQ:TRIP), and Frontier Communications (OTC:FTR) would have loved to just break even this year. 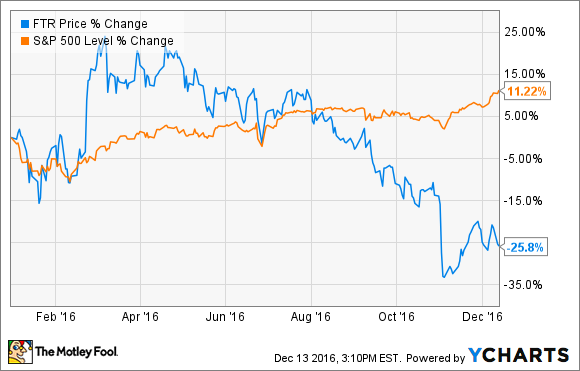 If Frontier is on a roll these days, it's a fearsomely negative one.

Shares of the regional American telecom fell 30% in 2015. This year, the stock has followed up with a 27% drop year to date. In less than two years, shareholder value has been roughly sliced in half.

It hasn't been all bad. In 2016, Frontier closed the acquisition of several large service territories from Verizon (NYSE:VZ). The $10.5 billion growth-by-acquisition deal added 2.1 million broadband subscribers and 1.2 million FiOS video customers to Frontier's portfolio. In the thick of launching into these markets, Frontier beat earnings expectations in three straight quarterly reports. That's a rare winning streak.

But the FiOS integration did not go smoothly. Customers across Texas, Florida, and California reported oodles of service outages and billing problems. Rival service providers stepped up with special discount programs, hoping to steal away some of Frontier's dissatisfied clients with low introductory rates and reimbursed fees for dropping Frontier contracts early.

A weak third-quarter report drove home that message in November, giving Frontier shares a 14% haircut in a single day. The massive influx of bought subscribers turned out to be an unstable bunch, sending Frontier's customer churn figures through the roof.

Frontier shares are now trading at prices not seen since the early 1980s. Low shares prices have pushed dividend yields sky-high, and the stock currently yields 12.2%. Those payouts may look tempting, but remember that extraordinarily rich yields can be a warning sign of serious financial trouble. Over the last four quarters, Frontier has paid out a grand total of $493 million in dividend checks. Free cash flows over the same period were negative. 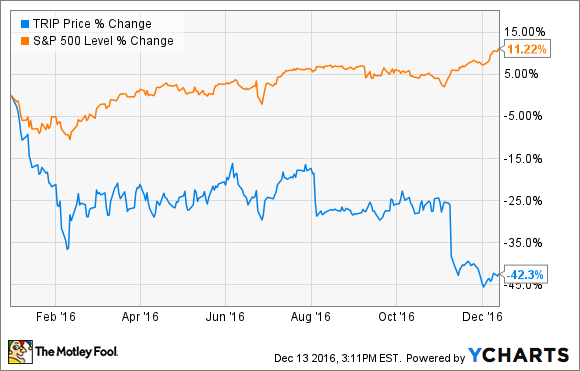 Travel review site TripAdvisor came off a 15% rise in 2015, only to plunge more than 35% in the first six weeks of the new year. The stock then floated along with the broader market for nine months, where a weak third-quarter report brought another 18% shot of investor pain overnight.

The third-quarter report stayed close to Wall Street's earnings targets but fell far short of revenue expectations. Management is describing 2016 as a year of transition and rebuilding, and the company is focused on long-term growth goals. TripAdvisor is retooling its services for a better fit with mobile usage, where traffic is growing fiercely but monetization remains difficult.

TripAdvisor CEO Steve Kaufer sees this inescapable move to mobile as a short-term headwind but a great fit for his company in the long run.

"It's something that is almost tailored toward where we're extremely strong which is in destination marketplace," Kaufer said in the third-quarter earnings call. "We have way more people using the TripAdvisor app when they're on the road."

That's a refreshingly Foolish mindset. When a management team is willing to take some short-term market pain in exchange for achieving greater long-term goals, that's a rare and valuable asset right there. In the meantime, opportunistic investors can take advantage of temporary share-price discounts and then hang on for the as-yet-unseen payoff a few years down the road. 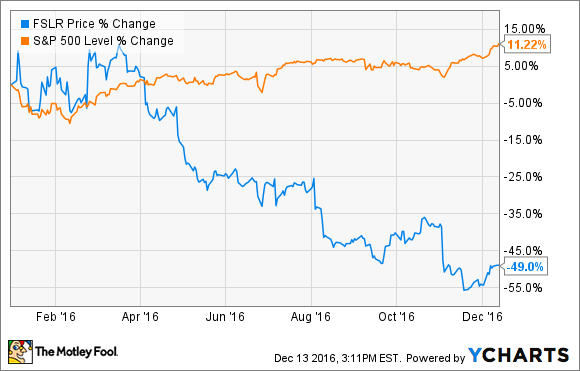 The company has responded with a huge restructuring program that will reduce First Solar's head count by 25%, while the development of its next-generation Series 6 technology was accelerated. The new platform will offer higher efficiency and lower installation costs, helping First Solar compete against low-cost traditional power sources.

The oil price situation is likely to spark a shakeout in the solar industry, as weaker players with rickety balance sheets succumb to impossible product pricing challenges.

But First Solar is not one of those prospective losers. While most solar specialists are showing negative earnings these days, First Solar is sporting strongly positive earnings, free cash flows, and EBITDA profits. Yes, even now, under the full force of a difficult energy market. If anything, First Solar should get ready to snap up failing rivals at steep bankruptcy discounts in the next few quarters.

And when the oil tide turns again, First Solar should stand prepared to make the most of it. Peak oil isn't here yet, but solar power and other alternative energy sources will inevitably have their day in the sun. Picking up a few First Solar shares while they're cheap seems like a smart way to play these long-term energy market shifts.