There are a number of questions right now about the future of clean energy in the U.S., primarily because of the new administration's appointees' hostility towards the industry. Most renewable portfolio standards, set at the state level, have been hit or will easily be reached, leaving utilities with little urgency to install new renewables. And there's not much electricity demand growth in the U.S., which means there's little need for new generation of any type.

This environment is challenging for wind and solar developers like First Solar (NASDAQ:FSLR), SunPower (NASDAQ:SPWR), NextEra Energy (NYSE:NEE), and NRG Energy (NYSE:NRG), which build or buy energy projects across the country. This requires a shift in strategy -- and it's turning corporations into a key customer base for renewable energy developers around the U.S.

Who is buying energy in corporate America?

Retailers like Walmart (NYSE:WMT), Target (NYSE:TGT), and Apple (NASDAQ:AAPL) have gotten a lot of attention for being three of the four biggest corporate solar customers in the country. But that only scratches the surface of the renewable energy corporate customers are buying.

According to a report from Bloomberg New Energy Finance, Google (NASDAQ:GOOG) and Amazon (NASDAQ:AMZN) are each buying over 1 GW of renewable energy in the U.S., Europe, and Mexico right now. Most of that energy is coming from wind, with solar energy providing the balance. 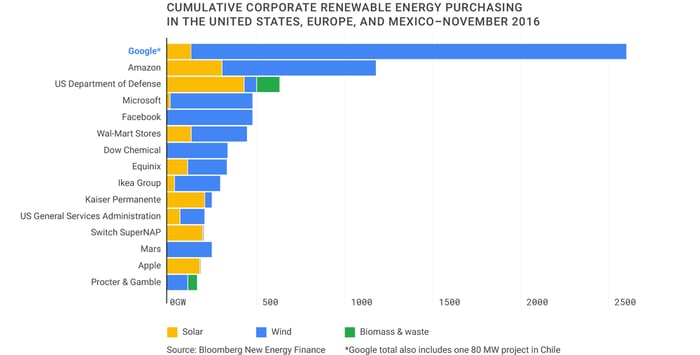 Microsoft (NASDAQ:MSFT), Facebook (NASDAQ:FB), and Walmart are the next three largest corporate consumers of renewable energy, with nearly 500 MW of wind and solar power purchase agreements.

Corporations view renewable energy as an advantage because they can tout clean energy credentials to customers, and it hedges their energy costs as well. And for tech companies like Google, Amazon, Micorosoft, and Facebook, which are building out massive data centers around the world, the assurance of predictable energy costs is important. In some cases they're even co-locating energy production at data centers to directly consume renewable energy.

Energy production isn't the only thing garnering attention from corporate customers. Energy storage has value in the corporate setting as well; up to half of a customer's bill is a demand charge, which is based on a peak energy consumption level, even if it only represents 15 minutes a month. Energy storage has been justified financially based on reductions in these demand charges, and the installations are piling up.

According to GTM Research and the Energy Storage Association, $812 million was invested in 38 corporate energy storage deals so far in 2016. And the industry is expected to grow from here.

When a corporation looks at energy, it's looking at cost, sustainability, and environmental impact. And renewable energy and energy storage win on all three fronts, so it's no surprise that corporate customers have become a big focus for the industry.

The opportunity shouldn't be lost on investors either. In 2015 there was 8.6 GW of new wind production installed in the U.S. and 7.3 GW of solar. The top five corporate customers alone have 5 GW of renewable power purchase agreements and growing. With utilities in no rush to install new renewables in 2017, corporate buyers could drive the market. And that new set of customers is a very bullish sign for the renewable energy industry.