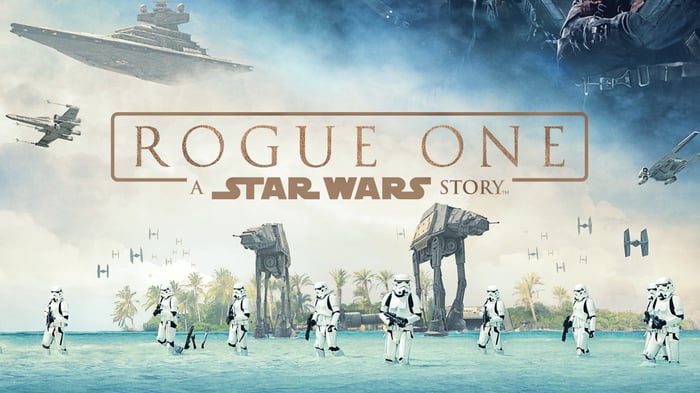 A new Star Wars movie hits a multiplex near you tonight, but if you're a fan of the iconic sci-fi series you're probably well aware of that celluloid nugget. You probably also already know that, unlike last December's Star Wars: The Force Awakens, Disney's (NYSE:DIS) film is not part of what will ultimately be the franchise's flagship nine-film series. Rogue One: A Star Wars Story is a spinoff, a tale of a band of rebels that attempt to steal the plans for the Death Star.

There's no denying that it will be a hit. Last year's Star Wars: The Force Awakens shattered box office records with $936.7 million in domestic ticket sales.

Rogue One is unlikely to surpass last year's entry. It's a new storyline with mostly new characters. Initial reviews have been generally positive, but not as strong as Star Wars: The Force Awakens received. A healthy 84% of the critics polled by Rotten Tomatoes are recommending the flick. That is less than the 92% score generated by The Force Awakens, but it's still a higher rating than what four of the first six films garnered.

The consensus seems to be that Rogue One will fare well but be no threat to The Force Awakens' box office throne. With decent but not mind-blowing initial critic reviews that's the smart call. Disney shareholders obviously are hoping for a monster theatrical run, but it's not critical for the media giant at this juncture. Let's go over the reasons why Disney can be just fine if the movie doesn't live up to the buzz.

Disney is a diversified media behemoth, and its movie studio is actually part of what is only its third largest business. Media networks and theme parks are Disney's two largest segments, accounting for 73% of this past fiscal year's revenue.

Disney's movie and film studio productions aren't insignificant. The works often permeate Disney media networks and theme parks. However, Disney is not a one-trick pony at the multiplex. It is the studio behind three of the four highest grossing films of 2016, and Rogue One will only pad its dominance.

2. Reinforcements are on the way

This is the second December in a row that Disney puts out a Star Wars film, and that streak will stretch to three next year when the eighth installment of the original triple trilogy opens. Unless it's a critical dud, that is the leading contender to surpass The Force Awakens.

There's also a young Han Solo spinoff in the works. Disney spent more than $4 billion for Lucasfilm. It's going to milk it every chance that it can.

3. There is a lot to look forward to in the year ahead

Disney doesn't stand still, and there will be a flurry of activity in 2017. Disney's theme park attendance should bounce back after a sluggish 2016, fueled by an Avatar-themed expansion that will be Disney World's most ambitious addition in three years. The cord-cutting will continue to eat away at Disney's cable properties, but digital initiatives continue to gain ground. Movie theaters will also be busy with Disney sequels for Cars, Pirates of the Caribbean, and Guardians of the Galaxy as well as the live-action reboot of Beauty & the Beast.

It will be great if tonight's cinematic debut is a hit. Exhibitors certainly hope so. More than half of the 24 screens at my local multiplex are showing Rogue One. However, there are so many moving parts to Disney -- and those other parts will keep moving no matter what happens on the big screen this holiday season.