The first thing to point out when looking at coal-focused Alliance and uranium miner Cameco is that both are solid companies. For example, Cameco's long-term debt makes up around 20% of its capital structure, while Alliance Resource Partners' long-term debt clocks in at around 12%. Both are reasonable, even low, numbers.

And while each is facing notable industry headwinds, both have managed to remain profitable through the toughest parts of the cycle. That's actually fairly impressive when you consider that falling coal demand and prices have pushed Alliance's giant competitors Peabody Energy, Arch Coal, and Alpha Natural Resources into bankruptcy court. And while while Cameco doesn't really have any large, pure-play peers, it's remained profitable despite uranium prices falling from around $70 per pound in 2011 to an average of around $23 per pound in the third quarter.

This strength in the face of adversity hasn't happened by chance: Both companies have been working hard to adjust to the fast-changing market. That's included cutting costs, investing in more efficient mines, and maintaining financial discipline. But that doesn't speak to the future opportunity each has before it.

Coal is a largely unloved fuel because it is dirty compared to other options. That's a key reason it's being displaced by such clean power sources such as solar and wind. However, neither of these clean-energy favorites are what's behind coal's recent fall in the United States. The issue is basic economics and natural gas.

Domestic natural gas prices hovering near historical lows have made it more advantageous for power companies to burn gas over coal in recent years. On top of that, natural gas is cleaner than coal, and it's easier and generally less expensive to build a gas plant than a coal plant.

That's a pretty big headwind for the coal industry and Alliance Resource Partners. It's also why the U.S. Energy Information Administration expects coal's percentage of the U.S. power mix to fall through 2040 in both the best- and worst-case scenarios. Natural gas, meanwhile, is expected to see gains either way. 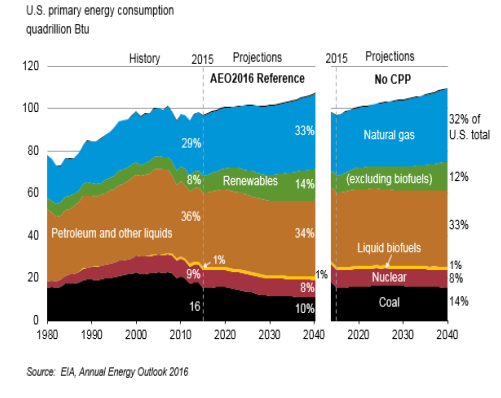 Alliance is well positioned for these changes because it operates mainly in the Illinois Basin coal region, which has been taking market share from other coal regions for years. However, U.S. focused Alliance can only steal market share from competitors for so long before it hits a wall. That's not to suggest it's doomed, or that coal is going away tomorrow -- far from it, since the EIA is still projecting coal to be an integral part of the picture in even its worst-case scenario.

Still, Alliance's future is constrained by the big-picture shift away from coal, even if it remains successful in maintaining or even expanding its market share. Yes, you can collect the ample 7% and well-covered distribution the partnership offers if you are looking for income, but you really can't expect notable business growth over the long term.

Nuclear, meanwhile, is out of favor because the high-profile disasters that have taken place over time highlight the power source's risks. It's also fairly expensive and time-consuming to build new nuclear power plants. These are some of the reasons the EIA expects nuclear's share of the U.S. power mix to flatline in the years ahead.

However, nuclear power doesn't emit carbon dioxide, the current environmental bad guy, and the power needs of emerging economies are massive compared to the mature U.S. market. That's why there are still 57 reactors under construction today, most of which are being built in Asia. The end result is that new reactors are expected to offset closures, resulting in more long-term demand for uranium. 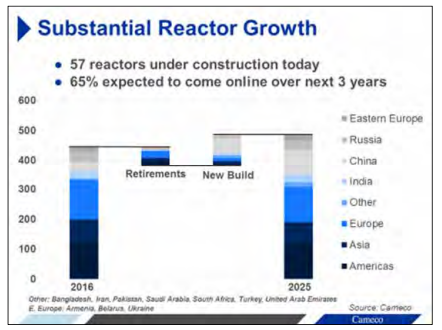 As one of the world's largest pure-play uranium miners, Cameco is positioned to benefit as demand increases. That doesn't change the low price environment it's suffering through today, but it suggests there's a more compelling long-term future for Cameco than what sits ahead of Alliance.

When you boil it down, Alliance and Cameco are both well-run companies with solid balance sheets that have shown impressive strength through their respective industry downturns. However, the long-term opportunity that each has before it is vastly different. If you are looking for a long-term bet on the future of power, Cameco's nuclear focus will provide you with a much better opportunity than Alliance, which sells a fuel that's slowly being pushed out of the mix.