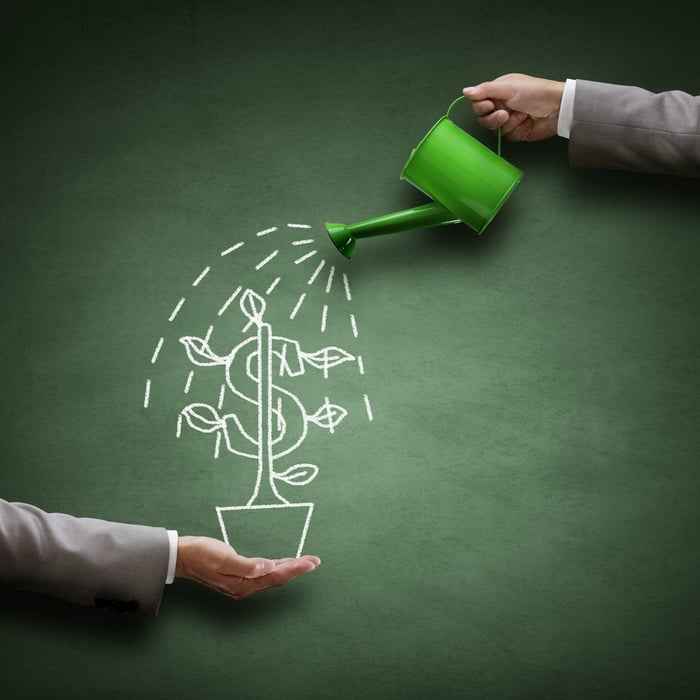 The dollar-store chain received a boost from its fiscal third-quarter 2016 earnings report, released late in the month. Dollar Tree's stock had inched up during November in advance of the release, and shares gained more than 8% after the company's report was filed on Nov. 22.

Dollar Tree reported a third-quarter sales improvement of 1.8%, though this number was slightly impacted by a comparability issue. The prior-year quarter included the results of 325 Family Dollar units, which have since been divested (the company today retains roughly 8,000 Family Dollar stores that it acquired through the merger in July 2015). So the reported sales improvement could have been marginally higher, but management didn't disclose the impact of the 325 stores on overall revenue.

Same-store sales increased 1.7%, which, while not exactly a breakneck pace, nonetheless represents decent growth, given the cautiousness of traditional dollar-store customers in 2016, and renewed competition from big-box retailers, including Wal-Mart (NYSE: WMT).

In its earnings release, Dollar Tree affirmed its full-year guidance, which appeared to relieve investors. It also revealed a slight increase in gross margin of 80 basis points, to 30.4%, which can be taken as more welcome news as it provides evidence that the company isn't relying on heavy discounting to prop up revenue benchmarks.

At present, this isn't the easiest of environments for dollar-store retailers. This month, shares of competitor Dollar General (NYSE:DG) were punished after its own earnings report revealed slower growth due to deflationary pressures, and reduced SNAP (Supplemental Nutrition Assistance Program) benefits available to its customers.

Dollar Tree is slightly insulated from food deflation, as its namesake stores tend to stock less fresh produce and dairy relative to competitors, although its acquired Family Dollar Stores carry higher food inventory than flagship locations. As for the effect of SNAP benefit curtailment on customer spending habits, this hasn't yet cropped up as a performance issue cited by Dollar Tree management.

Significantly, the company appears to be successfully managing its integration with Family Dollar, which now exists as a business segment comprising about 52% of total company revenue. In September, Dollar Tree completed a post-merger debt refinancing, in which it prepaid $242 million of long-term borrowings in order to reduce future financing costs.

Though that's a small chunk of a total post-acquisition debt of nearly $7.1 billion, it reveals a commendable fiscal discipline. All in all, however, investors would be prudent to remain cautious around these shares, at least until the next couple of quarters reveal whether Dollar Tree can transcend current industry pressures.