Shares of Nuance Communications, Inc. (NASDAQ:NUAN) climbed 15.6% during the month of November, according to data provided by S&P Global Market Intelligence .

An upbeat fiscal fourth-quarter 2016 earnings report issued at mid-month brought a respite to Nuance stock, which has been mired in a price slump since shares hit a three-year peak of $21.45 in early Dec. 2015: 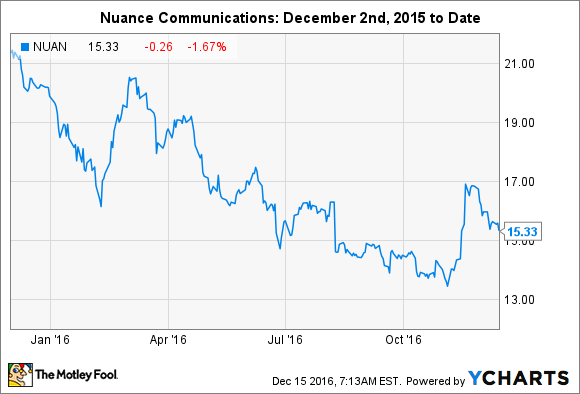 In its earnings filing, Nuance reported a 45% increase in fourth-quarter net new bookings over the comparable prior-year quarter, to $516.9 million. Bookings for the full year rose 4% over 2015.

Revenue, however, continued in a near-flat trend. The company's $506.2 million in fourth-quarter revenue represented an advance of half of 1% over Q4 2015, and full-year revenue of $1.95 billion increased only 1% over the prior year. Still, the organization was able to claim a full-year, 400-basis-point improvement in recurring revenue, to 70% of total revenue.

During management's earnings conference call on Nov. 17, executives pointed to growth in cloud-based services, including its voice biometrics, automotive, healthcare, and mobile offerings as offsets to declining handset licensing sales. As an example of this next generation of revenue streams, management cited "Dragon Medical Advisor," an artificial intelligence software product that analyzes doctors' transcribed case notes in real time and offers advice during documentation.

In a noteworthy development announced alongside its earnings release, Nuance disclosed that longtime CEO Paul Ricci will retire in 2018, leaving ample time for a transition to new leadership.

For fiscal 2017, Nuance has promised a return to organic revenue growth, albeit at the slim margin of 1%. Net new bookings are expected to grow between 2% and 6%.

Recurring revenue as a percentage of the total top line is forecasted to rise to 73% next year. With the benefit of such a high percentage of recurring revenue, the company is also beginning to look ahead to fiscal year 2018. Management conveyed to analysts during the fourth-quarter call that it expects a steady improvement in revenue growth, bookings, and margin trends over the next two years.

As you can gather from the guidance above, Nuance should plod along steadily next year. Its newer voice applications are making up lost ground for a few declining lines of business. However, appreciable growth isn't on the horizon yet.

Even though shares have lost about 30% of their value since December of last year, there's no indication that a strong upside catalyst will emerge soon. Still, the overall business model seems stable, and at a forward price-to-earnings ratio of 9.7, Nuance may be cheap enough for patient investors to consider acquiring a position at some point during 2017.