The main differences between the two companies are scale -- AT&T had revenues of $40.9 billion in Q3, while Frontier had $2.52 billion -- and diversity. AT&T sells internet, cable, satellite, landline, and wireless service, while Frontier offers only cable, landlines, and internet. AT&T, of course, also has a deal to acquire Time Warner (NYSE:TWX), which would heavily diversify it outside its core businesses.

AT&T is what Frontier hopes to be someday. It's a giant that has the most pay-television customers (when you add DIRECTV and its U-verse brand), the second-most wireless subscribers behind Verizon (NYSE:VZ), and the third most internet customers. Frontier has bought its way to a position of minor relevance with about 5.5 million customers, and about 4.4 million of those get broadband from the company and 1.5 million paying for cable.

Still, while AT&T dwarfs Frontier, giants have a longer way to fall than those a little closer to the ground. Both companies face similar challenges, but each one is set up to handle them differently. 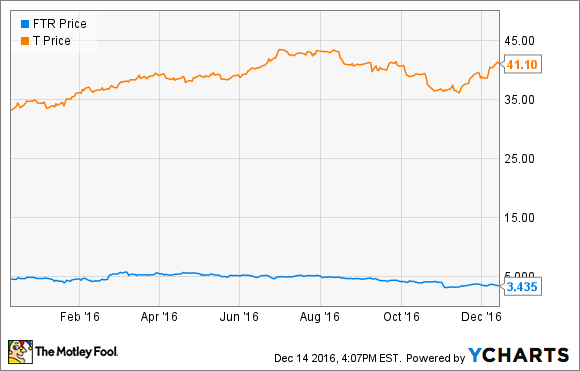 AT&T has built a revenue machine where it can leverage its various products to attain customers, keep them, and get them to spend more. For example, it no longer offers new wireless subscribers unlimited data, but it made an exception to that policy for anyone who bundled wireless with DIRECTV. That's an attractive deal that's likely to win customers from rivals. It's also an offer that makes it that much harder for people to leave.

AT&T, however, does face risks in a few areas. In wireless, the company faces pricing pressure from T-Mobile and Sprint, both of which are spending a lot of money on ads pointing out that AT&T and Verizon no longer have commanding leads when it comes to network quality. The company also faces cord-cutting issues on a grand scale.

Broadly, its U-verse service has been losing customers (325,000 in Q3), while its cheaper DIRECTV has been gaining about the same amount (323,000 in Q3). That's an intentional move, as the company wants to move people to its satellite service, but ultimately it gives the company nearly 21 million eggs in the same DIRECTV basket. That's a risk that has so far paid off, but satellite is less reliable than wired service in many cases, and customers losing service during bad a snow or rain storm could tip them over the edge when it comes to cord-cutting.

AT&T also has the very uncertain prospects of its purchase of Time Warner. Should the deal be approved, there's no guarantee that the company will be able to use the content company to increase loyalty to its other products. It's also worth noting that cord-cutting and skinny bundles are negative headwinds for Time Warner's cable channels as well.

Those numbers tell you everything you need to know about how investors see the two companies against each other. But there is one case where in 2017 Frontier shareholders could see a better than 20% return. That's not likely to happen because of continuing operations, as the company has had a hard time holding onto or adding customers. That could, maybe even should, improve as the company further integrates the California, Texas, and Florida properties it bought from Verizon, but it's hard to see Frontier making any big leaps forward.

Where Frontier could outpace AT&T in shareholder return next year is if it were to be acquired. There are very few smaller cable and internet players left to be acquired, and Frontier might fetch more than the 22% premium Altice paid for Cablevision  in September 2015.

Cable and internet make up a space where size matters, and Frontier doesn't have it. AT&T faces some negative headwinds, and the Time Warner deal could be a short-term drag, but ultimately it simply has too many entrenched ways to make money. It faces the same challenges Frontier does, but it has more tools to combat the problem.

An acquisition might bring Frontier shareholders a better return than AT&T delivers next year, but for the long term, despite the challenges it faces, AT&T has a more diverse company setup to win customers, keep them, and wrangle more money out of them. Frontier simply can't offer that.