Stocks posted minor declines on Friday, as the Dow Jones Industrial Average (DJINDICES:^DJI) and S&P 500 (SNPINDEX:^GSPC) indexes both took tiny steps back from all-time highs. The indexes trended lower for most of the trading session and each finished with losses of less than 0.25%.

Oracle shares shed 4% on heavy trading volume after the enterprise software titan posted soft sales growth for its fiscal second quarter. Revenue was $9.1 billion, or roughly on par with consensus estimates. But Oracle's growth rate slowed to 1%, excluding currency swings, down from 3% in the prior quarter.

Profitability continues to improve as the company expands deeper into its cloud businesses. The software-as-a-service and platform-as-a-service divisions spiked 81% to mark Oracle's fourth consecutive quarter of accelerating gains. And as profit margins on those services jumped to 61%, they helped push overall earnings power higher. Oracle's overall operating margin improved to 42% of sales from 41% last year.

CEO Safra Catz sounded an encouraging tone on the positive momentum in Oracle's growth businesses. "As we get bigger in the cloud, we grow faster in the cloud," she said in a press release. Oracle has now passed $1 billion of quarterly cloud revenue, Catz noted. And, unlike rival salesforce.com, Catz pointed out, its growth rate isn't slowing. The company now hopes to push its advantage over Salesforce in areas like database as a service and infrastructure as a service, but it appears investors will have to wait before seeing those gains translate into substantial overall sales growth.

Jabil Circuit is on track for a return to growth

Electronic manufacturing services specialist Jabil Circuit gained 12% to push back into positive territory for the year after beating analyst expectations for its fiscal first quarter. Revenue ticked down 2% to $5.1 billion, which was ahead of the $4.9 billion that management forecast in late September. Profits came in at the high end of executives' forecast, too, thanks in part to aggressive cost-cutting. 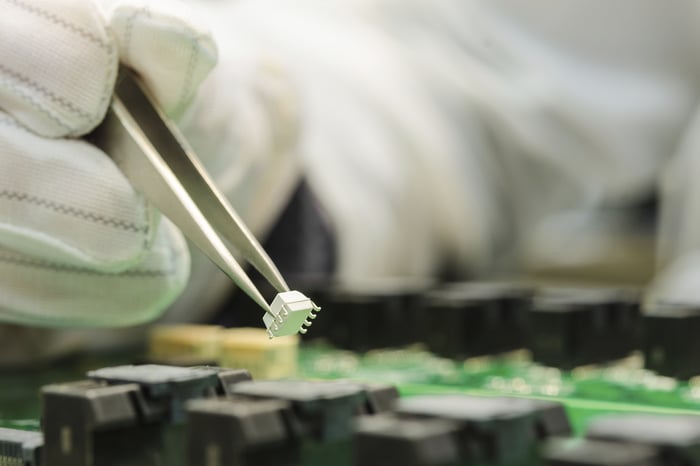 "I'm really pleased with our strong first quarter results," CEO Mark Mondello said in a press release. "We saw strength in our healthcare, packaging and consumer lifestyles businesses," he explained.

If management can hit those targets, the company will soon post an improvement in its quarterly sales growth pace for the first time since early 2015. A sharply lower cost base, meanwhile, brought on by Jabil Circuit's restructuring cuts, seems set to fund increasing cash returns to shareholders. Expenses fell 6% to outpace the revenue decline this quarter as the company directed fewer resources toward salaries and overhead.