Wal-Mart (NYSE:WMT) shares rallied about 13% this year on the strength of its turnaround efforts, easily outperforming the Dow Jones U.S. Retail Index's 3% gain. But now that the stock is hovering in the $70s, investors might be wondering if the retail giant will split its stock soon. Let's look back at Wal-Mart's stock split history to see if that could happen in the coming year. 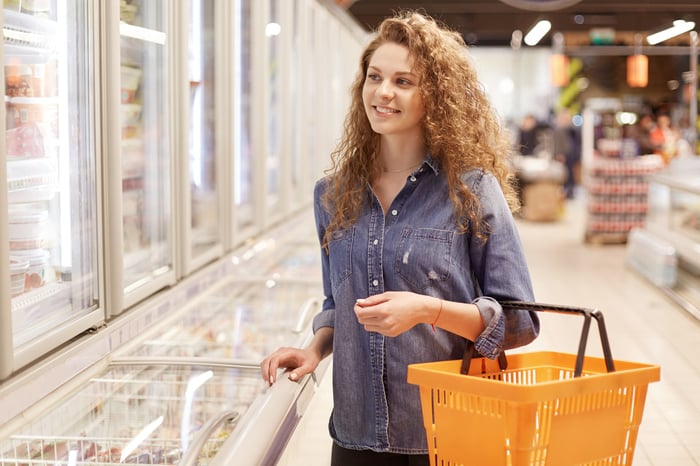 If Wal-Mart had never split its stock, it would be trading at over $147,000 per share -- making it too hard for mainstream investors to purchase a single share.

Wal-Mart has only split its stock above the $70 level twice -- once in 1983 and again in 1999. This means that if Wal-Mart continues rallying, the stock might undergo another two-for-one split.

But stock splits don't matter that much

Stock splits make a stock look "cheaper," but its valuation doesn't change -- it simply cuts individual shares into smaller pieces which are presumably easier to buy in even lots. That might generate more trading volume from short-term traders, but it doesn't have a meaningful impact on its long-term growth.

Warren Buffett hated stock splits because he believed that they attracted short-term investors instead of long-term ones. That's why Berkshire Hathaway has never split its Class A shares, which cost over $247,000.

Wal-Mart's e-commerce rival Amazon trades at about $980 per share, but the stock hasn't been split since 1999. Yet Amazon's 1,300% return over the past decade has crushed Wal-Mart's 70% gain -- indicating that splits have very little to do with long-term price appreciation.

What Wal-Mart investors should be watching

Instead of focusing on stock splits, Wal-Mart investors should follow more meaningful developments, like the billions of dollars it's invested in wage hikes, better employee training, and e-commerce expansion. Reports indicate that those efforts are paying off -- analysts have praised its cleaner and more organized stores, employees are more satisfied with their career growth options, and customers are finally returning.

Wal-Mart is also countering Amazon with price-matching strategies, membership plans for free shipping, curbside pickup, and the expansion of its digital ecosystem with upgraded apps and its acquisition of e-commerce start-up Jet.com. It's also challenging the growth of big dollar store chains like Dollar Tree (NASDAQ: DLTR) with more Neighborhood Markets.

Despite all that progress, Wal-Mart's growth remains sluggish. Analysts expect its revenue and earnings to respectively rise just 2% and 1% this year. However, Wal-Mart trades at 18 times earnings, which is slightly lower than its industry average of 19 for discount stores, and its forward dividend yield of 2.6% is higher than the S&P 500's current yield of 2%. Investors should focus on these facts and figures -- not stock splits -- to gauge Wal-Mart's strength as a long-term investment.

Investors should know that a low stock price doesn't make a stock "cheap." That can only be determined through key numbers like price-earnings and price-sales ratios. Therefore, if you didn't like Wal-Mart at $78, then don't buy it if a split reduces its price to $39. Likewise, if you think Wal-Mart is a great buy but only have enough to buy 50 shares, don't wait for it to split just so you can buy an even lot of 100 shares.