Texas Roadhouse (NASDAQ:TXRH) stock shot up to fresh all-time highs last week on an analyst price target increase. With all but two weeks left in 2016, the company is up about 40% on the year. Don't be gun-shy, though; the company still looks good for 2017 as well. 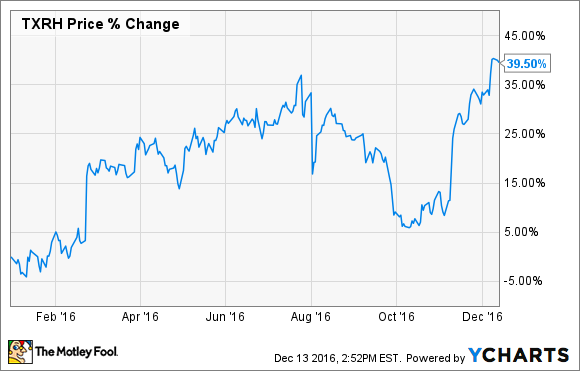 Louisville, Kentucky-based Texas Roadhouse operated 510 restaurants in 49 states and five international countries at last count. Over the last few years, the company has been aggressively growing by simultaneously opening new locations and attracting new diners to existing ones.

Many restaurant chains in the U.S. struggled earlier in the year with declining foot traffic after a strong multiyear run. That hasn't been the case for Texas Roadhouse, which just logged its 26th quarter in a row of positive comparable-restaurant sales growth.

What is the secret recipe behind all of that growth? Texas Roadhouse cites its focus on mid-sized markets, which it has identified as the best-performing type of community for its restaurants. Locations tend to be near shopping and entertainment centers that target young and working-class families. The large portions of food at a value have been a winner in these communities, luring families and work commuters in with the fun and friendly "Texas" atmosphere on display.

What the company has planned next

Content with results to date, the chain's management sees more of the same in the way of business development during the new year. And why not? If it isn't broken, don't fix it.

Another 30 or so locations are planned, with 24 of them either already under construction or getting ready to start pushing dirt around. The focus will continue to be on Texas Roadhouse restaurants, but the company is just beginning to ramp up openings of its Bubba's 33 sports bar concept. Of the 30 planned openings, seven or eight will be Bubba's, which would increase the total count of those restaurants to about 20.

Focusing on increasing foot traffic will again be a priority. On the last earnings call, CEO Kent Taylor said a 1% increase in traffic equates to about a 6% rise in earnings per share. Management also sees its food costs decreasing in the low single digits, which also helps the bottom line.

Working against those positives, though, will be labor cost increases. The company warned that a mid-single-digit rise in labor driven by wage and overtime increases is in the cards during 2017. Through the third quarter of 2016, labor made up 32.4% of total operating expenses.

The stock may have gotten a little ahead of itself in the last few weeks with the big price run-up. However, Texas Roadhouse expects to have another solid year in 2017 in spite of increasing expenses related to wages. 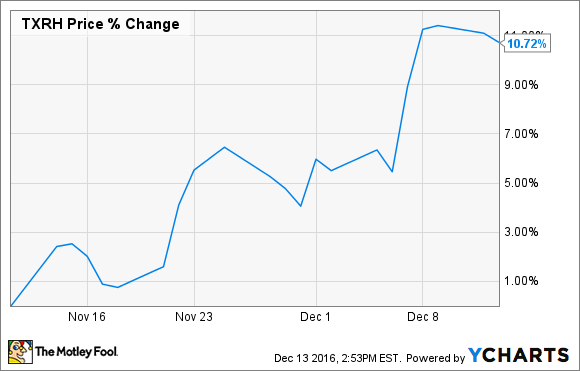 The new restaurant openings have been a winning strategy over the last few years. Addressing the possibility of tapping out all the opportunities for the primary Texas Roadhouse name in advance, the company has been working on the companion Bubba's 33 business. Investors should look for that second chain to provide an increasingly larger part of the company's growth in the years ahead.

Even though share prices have soared as of late, Texas Roadhouse looks like a solid long-term bet to me.