Barring some unforeseen calamity, Intuitive Surgical's (NASDAQ:ISRG) stock is about to do something that has only happened once before in the company's history: post three consecutive years of positive returns. Could 2017 be yet another winning year -- and maybe even the robotic-assisted surgical systems maker's best year yet?

If we shook a magic 8-ball after asking if Intuitive Surgical's stock will move higher in 2017, I'd say the most accurate answer to bubble up would be "Outlook good." The company's revenue increased 14% and earnings jumped 33% year over year in the first nine months of this year. I think those trends will continue into the new year.

Recurring revenue accounts for over 70% of Intuitive Surgical's total revenue. That percentage has been growing over the last few years. The company's steadily increasing install base has made it easier for Intuitive Surgical to keep growing revenue and earnings because of the compounding effect.

Intuitive Surgical is focusing on several areas to keep the growth going. Probably the most important initiative is expanding use of its daVinci surgical systems in general and thoracic surgery, especially in colorectal surgery and hernia repair. Intuitive Surgical plans on introducing new products to grow sales. Increasing its presence in international markets, particularly Europe and Asia, is another focus area that should pay off.

The company could also help drive shares higher in 2017 through stock buybacks. Intuitive Surgical's board of directors recently increased its stock repurchase program to $3 billion. That amount represents roughly 12% of the company's current market cap. While there's no timeline on when the shares will be bought back, significant activity next year could help ensure the stock makes it four years in a row for positive returns.

What about the chances of 2017 being the best year yet for Intuitive Surgical? Shaking the magic 8-ball probably would return the answer of "Very doubtful." The main challenge is that the company's stock has enjoyed some great years in the past. 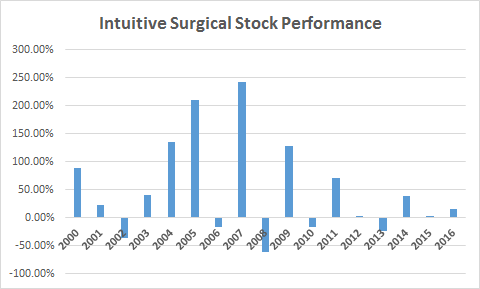 During the company's history, Intuitive Surgical has had four years where the stock more than doubled. Shares more than tripled in value in two of those years. That kind of performance is hard to beat.

While the company has many positives headed into 2017, there are also some challenges. Growth rates for mature procedures like prostate surgery will likely taper off somewhat. It's possible that political tensions with China could hold back Intuitive Surgical's growth in that market.

It's not unrealistic to expect Intuitive Surgical's stock to post double-digit percentage gains next year, as it is on track to do in 2016. However, where the company is now in terms of market penetration is a lot different than where it was 11 or 12 years ago when the stock was in overdrive.

I think that Intuitive Surgical's main competition next year won't come from a rival. Instead, the company's biggest challenges will probably be macroeconomic factors such as rising interest rates, international trade policies, and perhaps hospitals tightening capital budgets in anticipation of a rollback of Obamacare.

However, stiffer competition is likely coming relatively soon. Mazor Robotics (NASDAQ:MZOR) is already gaining momentum with its Maxor X robot-guided surgical systems in the spine surgery market. The Israel-based company has also partnered with big medical device make Medtronic (NYSE:MDT), which already bought a stake in Mazor and will ultimately own 15% as part of the two companies' strategic agreement.

For now, Mazor doesn't present a significant threat to Intuitive Surgical. But both companies will want to grow -- and that means expanding the types of procedures performed with their systems.

This coming challenge from Mazor and Medtronic might make it increasingly tougher for Intuitive Surgical to achieve positive stock returns as it has in 10 of the last 17 years. Will Intuitive be able to respond effectively? The magic 8-ball says, "Ask again later."