Shares of Advanced Micro Devices (NASDAQ:AMD) have soared a staggering 280% year to date. The company is still unprofitable, but investors are betting that AMD is on the verge of a historic turnaround. Polaris, AMD's mainstream-oriented GPU, launched earlier this year, producing growth in the company's core business after a long streak of disappointing results. AMD is set to re-enter the high-end GPU market next year with Vega, and its Ryzen CPU, formerly known as Zen, will look to challenge Intel (NASDAQ:INTC) during the first quarter. 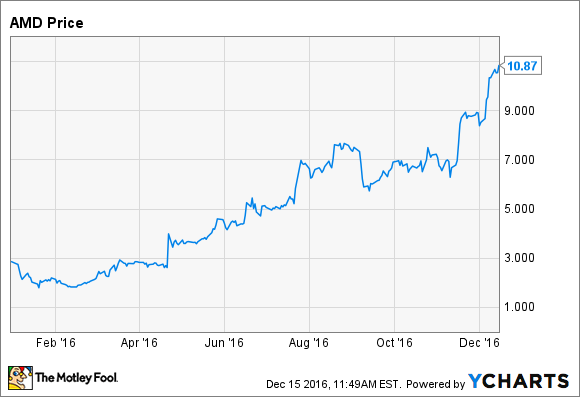 AMD has also seen some momentum in an area that has been so far dominated by NVIDIA (NASDAQ:NVDA). Alphabet's Google announced last month that it planned to install both AMD and NVIDIA GPUs into its data centers, offering them as part of its cloud platform. While NVIDIA's products are already available through most of the major cloud-computing vendors, AMD has been slower out of the gate, making the Google deal a significant win for the company. Radeon Instinct, a new line of graphics cards aimed at machine learning set to launch in 2017, will put AMD in the running to power artificial intelligence workloads.

With such a large gain in such a short period of time, investors are right to ask: Can it last? If everything goes right for AMD next year, the stock could be in for further gains. But it won't take much going wrong for 2017 to be a bad year for the stock, even if it's a relatively good year for the company. Here are three reasons AMD stock could fall next year.

Looking at AMD's stock chart tells a story of extreme optimism followed by disappointment. Shares of AMD have spiked before, in the early 2000s and again around 2006, only to collapse when the company failed to deliver. The company's current market capitalization isn't yet at an all-time high, but it's at the highest level in nearly a decade. 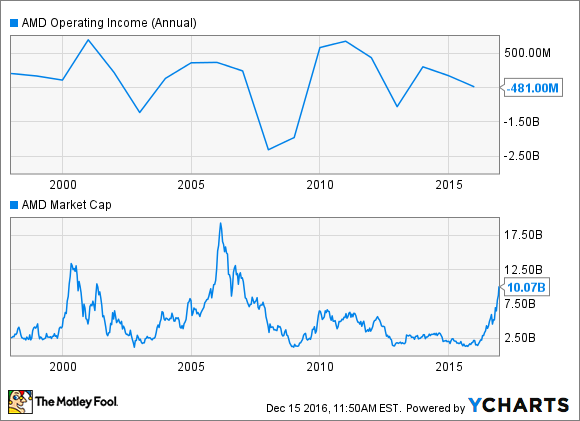 In AMD's best year in the past 10, the company managed to earn a net income of about $500 million. The market is currently valuing AMD at around 20 times that number. In other words, investors are not only betting that AMD will make a comeback, but that its profits will soar to record levels. That's a bold bet for a company that has a long history of disappointing investors.

This time could be different. AMD has a semi-custom business that's producing profits for the company, and it appears that Ryzen could give Intel a run for its money. But if the bull case doesn't unfold exactly as expected, a major correction could sting investors next year.

Polaris produced some growth for AMD, with its computing and graphics segment revenue jumping 11% year over year during the third quarter. But NVIDIA stole the show, registering 63% growth in its gaming segment, driven by its new Pascal graphics cards. Both companies benefited from strong demand for graphics cards during the quarter, but NVIDIA claimed a bigger piece of the pie.

Steam, the dominant PC gaming platform, collects hardware data from its users, and the most recent results suggest that NVIDIA's dominance isn't going away. The only Polaris graphics card to register on the survey is the RX 480, which claimed just 0.37% of Steam users in November. Meanwhile, NVIDIA's GTX 1080, 1070, and 1060, all higher-end cards launched around the same time, were being used by 0.86%, 1.59%, and 1.53% of users, respectively.

AMD plans to launch more powerful graphics cards based on its upcoming Vega GPU next year, hoping to challenge NVIDIA in the high-margin high end of the market. AMD is certainly in a better competitive position today than it was in a year ago, but Polaris hasn't been the runaway success that the company needed it to be. Vega will need to be a home run. If it's not, AMD investors could be in for a rough ride next year.

AMD recently provided details on Ryzen, its upcoming line of CPUs formerly known as Zen. Ryzen processors for desktops are expected to be available during the first quarter of 2017, with notebook variants coming during the second half. The company demonstrated that an eight-core version of Ryzen matched or beat Intel's i7 6900K in a few tasks, including image rendering and video transcoding.

Ryzen comes with some new features, including improved prefetching driven by learning algorithms meant to minimize bottlenecks, and a refined boost system that allows clock speeds to be adjusted. It's built on a 14-nanometer FinFET process, meaning that the manufacturing gap between AMD and Intel is at its narrowest in years. If Ryzen is competitive on a performance-per-dollar basis with Intel's chips, AMD could gain a meaningful amount of market share.

The only benchmarks we've seen so far have been from AMD, and at this point we know nothing about the more mainstream versions of Ryzen or the pricing. Ryzen needs to offer a compelling value proposition to compel Intel users to switch, and we won't know if that's the case until third-party benchmarks and pricing details surface. Even with Ryzen looking like it's going to be a competitive product, anything short of significant market share gains for AMD could send the stock tumbling.