Neha Chamaria, Timothy Green, and Todd Campbell
(TMFNehams)
Author Bio
A Fool since 2011, Neha has a keen interest in materials, industrials, and mining sectors. Her favorite pastime: Digging into 10Qs and 10Ks to pull out important information about a company and its operations that an investor may otherwise not know. Other days, you may find her decoding the big moves in stocks that catch her eye. Check back at Fool.com for her articles, or follow her on Twitter. Follow @nehamschamaria
Follow @nehamschamaria

Warren Buffett's investing prowess reflects in Berkshire Hathaway's (NYSE:BRK.A) (NYSE:BRK.B) stupendous performance: The stock's gains are more than double that of S&P 500 returns this year, as they generally have been over the past five decades. After all, it isn't a fluke that Buffett has earned the label of being one of the greatest investors of all times.

However, as much as Buffett is known for his knack for buying great businesses and holding them for the long term, even his stock picks can fall short of expectations sometimes. When we asked three of our contributors to each name one stock they believe Buffett is dead wrong about, they came up with General Motors (NYSE:GM), Deere & Company (NYSE:DE), and Apple (NASDAQ:AAPL).

Todd Campbell (General Motors): Let's face it. Buffett's better than anyone else at picking stocks, including you, me, and the Fed. But based on Fed research, a policy of interest rate hikes could make Buffett's 50-million share General Motors bet a losing one.

If that's so, then the Fed's recent policy decision to bump up rates, and potentially hike rates more in 2017, could mark the end of the party for General Motors, which has seen sales skyrocket since the recession due in part to easy money policies that have made automobile interest rates incredibly attractive.

Granted, the Fed's path right now appears to be one that will spread out the increases over time, which should make their impact more manageable for the industry. However, investors might not want to ignore the risk that higher-rate loans may pose on demand, particularly since General Motors' shares are trading much closer to their post-recession highs than they are to their lows.

Neha Chamaria (Deere & Company): As an iconic American brand that dominates the global farm-equipment industry, it isn't surprising to see Deere in Buffett's portfolio. However, farm equipment is among the most volatile businesses there are as its fortunes are subject to the vagaries of crop prices and farm income -- two highly unpredictable and uncontrollable factors. That also makes Deere's earnings highly unstable.

Strangely, the recent run up in Deere's stock -- 25% in the past quarter -- doesn't quite match up with farming's fundamentals. The demand for farm equipment, especially the costlier, high-horsepower machines that generate higher margins for Deere, depends largely on farm income. Deere shares and the farm price for key crops corn and soybean are moving in opposite directions right now, which defies logic. 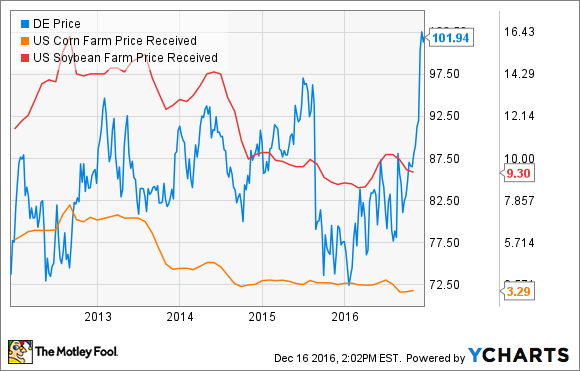 The market is clearly ignoring the signs and betting on Deere's cost-cutting efforts to boost margins, but there's only so much the company can do. In fact, Deere is guiding for lower sales volumes and an 8% decline in its net profits for financial year 2017. In other words, there's still time before we can call it a bottom. In fact, farm cycles last several years, so when things will turn around is anyone's guess. My biggest concern? Deere's stock hit all-time highs some days ago, despite decelerating profits and persistent headwinds.

Deere makes up a small portion of Berkshire's portfolio, and it might have even been picked by one of Buffett's investing managers, Todd Combs or Ted Weschler, but Buffett's company remains Deere's largest institutional investor, and the stock is among Berkshire's 15 largest holdings. That could backfire, and investors might be better off avoiding this agriculture stock altogether.

Not a Buffett stock at all

Tim Green (Apple): Berkshire Hathaway invested $1 billion in Apple earlier this year, a move that didn't seem Buffett-esque at all. That's because it wasn't -- the investment was made by one of two investment managers who handle a portion of Berkshire's vast stock portfolio. Buffett himself had nothing to do with the investment; he gives his managers free reign to pick stocks without consulting him.

I don't think investing in Apple is a great idea, despite its beaten-down valuation. The company is heavily dependent on the iPhone, deriving the majority of its revenue from that single product. Mid-range phones have become better over the years, and Apple is doing pretty awful in certain markets, namely China, where lower-priced competition is proving difficult to handle. Apple's revenue from China tumbled 30% year over year during the fourth quarter, reflecting these challenges.

The odds of Apple coming up with another hit on the scale of the iPhone is unlikely. The company is focused on growing its services business, looking to better monetize its massive install base, but Apple makes nearly all of its money selling hardware. iPhone unit sales dropped 13% in the fourth quarter compared to the prior-year period, and while there's hope that an amazing iPhone 8 launch next year will reinvigorate sales, Apple may genuinely be out of ideas.

Apple looks like a value stock, but I'm not convinced the company can maintain its earnings, let alone grow them, going forward. That's why I think Berkshire is dead wrong on Apple.